It’s the end of another long campaign. The players are off for a well-earned rest – bear in mind that many of them had the little matter of a World Cup in the middle of a full league calendar, many, many games, so a full recharge is required. For me, the inquest begins here…

I could walk away now. Barca won the league and the Spanish Cup, so there’s nothing keeping me here. It helps that they claimed the Champions League also. In many ways, going now would be best, Hansi Flick style – after the sort of year we’ve had, there’s really only one direction in which we can go. On the other hand, they’re so much fun. Another season then, at least one more, and then look for a plummy job elsewhere. Given there’s plenty of time remaining I would like the next assignment to be a proper challenge. Anyone in France apart from PSG would be a long-haul assignment, or perhaps a great English team that has fallen short of their promise and expectations.

Well, that went all right, didn’t it? Let’s start with the new signings, of whom defender Pau Torres was considered to be the pick. Now valued at £65 million, which is eight million more than we paid for him, Pau’s mission was to move Barca past the axiom of Pique (getting old) and Umtiti (doesn’t want to stay, not all that good) and largely succeeded, forming a partnership with Milan Skriniar that became the side’s bedrock.

The other arrivals who made a great impact were Ismael Bennacer, Hector Bellerin, Alex Grimaldo, Florentino Luis and the largely sensational loan signing of Tammy Abraham, who scored a staggering twelve goals in as many appearances and is pretty much a shoo-in for being with us in the new season. Bruno Guimaraes and Marc Cucurella were very good also, indeed I’d have to argue that the club’s money was well spent this time around. 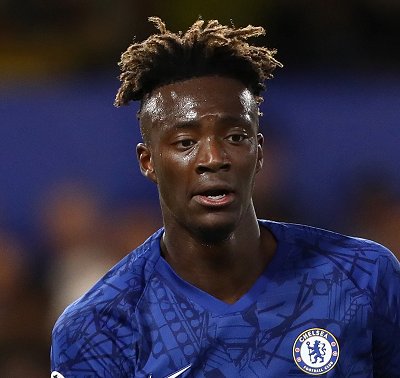 The Camp Nou was expanded and still managed to achieve a 90% average attendance, very good considering the middling standard of many of the sides we faced. Clearly this isn’t Napoli. The Catalans will come, and they’ll be here expecting good things.

The club’s reputation hasn’t changed, which is good because it was already at five stars. Our revenues were boosted with £207 million raked in via sponsorship deals, a scary amount of Wonga. Most areas of income were increased, and we also managed to sell 1,545,355 shirts. I’ll leave you to guess which was the most popular name to have on the back. 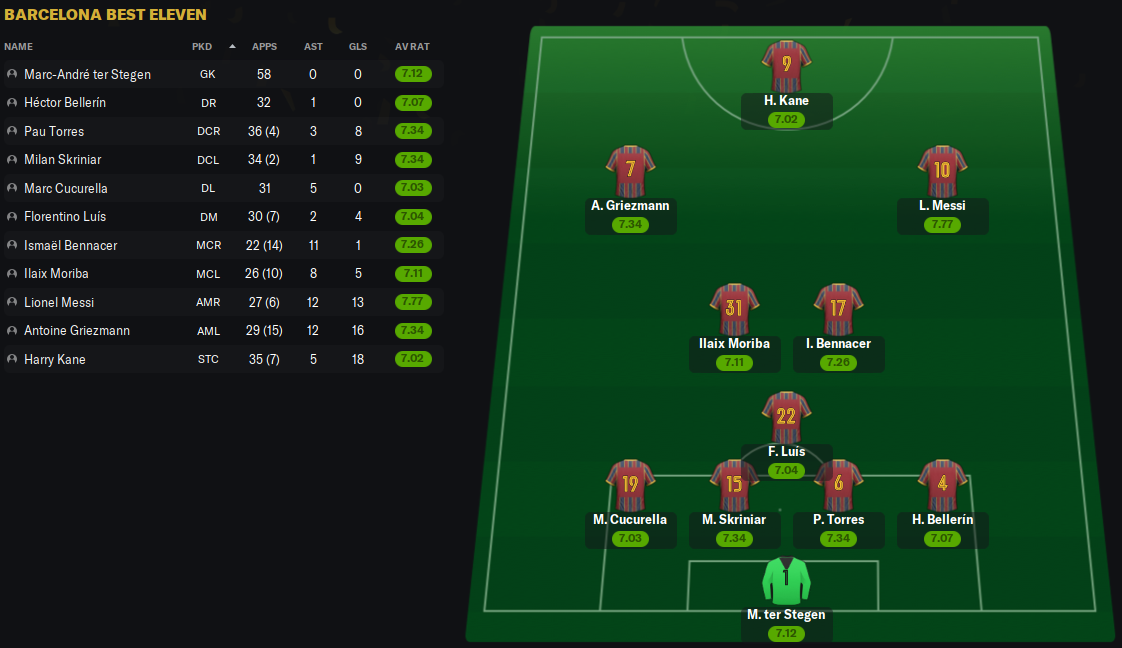 Here’s our best line-up. You’ll note the absence of Pique (largely overhauled), Alba (sharply on the slide), Busquets (not as good as Luis) and Sergi Roberto (better options elsewhere), however despite his two months off Lionel Messi continues to rule the set-up. Sometimes, a player just transcends elements like age and fatigue, and continue to give everything they’ve got. And when what they’ve got is a lot, you’re left with a Little God.

Despite all the plaudits that continue to flow in his direction, Messi lost out in the Fans’ Player of the Year stakes to Antoine Griezmann, a player who grew steadily in authority over the course of the term. I wasn’t sure about him at first, yet by the end I couldn’t imagine a future without him. I was very pleased to see Ilaix Moriba named as our best young player – a richly deserved accolade for the midfielder. Messi will have to be content with being named World Footballer of the Year, and Best Spanish Player. Marc-Andre ter Stegen won both the Spanish and Champions League goalkeeper awards. I was named manager of the season.

Miles White of The Coaches’ Voice opined that ‘Barcelona started better than anyone else and ran with the all the way to the title.’ At Voetbalzone, Rick Molenaar chipped in with ‘The spell of football at the start of the season was the making of Barcelona. It really set them up for success.’ Nice.

The Wider World and Available Jobs

Back at my old stamping ground, Jose Mourinho achieved great things in romping to a third successive Serie A title for Napoli. They racked up 101 points to finish ten clear of Juventus, with Meret once again earning the praise for another brilliant season in the nets. Inter and Fiorentina completed the top four. Juve had to content themselves with the Italian Cup.

An eleventh consecutive Bundesliga win for Bayern Munich (yawn), who finished thirteen points ahead of Monchengladbach and Dortmund. The latter gained some revenge in the DFB-Pokal, beating Bayern 2-0 at the Olympiastadion, but on the whole the prospects of overhauling the Munich-based giants look distant.

A similar state of affairs in France, with PSG claiming 101 points and carving open a 21-point lead over runners-up Monaco. Erling Haaland turned out to be as irresistible as expected, finishing the division’s leading scorer, while Mbappe earned an 8.00 playing average.

We will face Tottenham in the European Super Cup. A tense Europa League final against Juventus was finally won on penalties, after goals from Carlos Vinicius and Andrea Horta only served to cancel each other out.

Available top flight jobs (which I don’t want) amount to a grand total of one, which is with Brest in the French Ligue Un Uber Eats.

My reputation has gained another half-star, which makes me superb. The Barca effect has increased my earnings to £155,000 per week, which is around a quarter what we pay to Griezmann and Messi, and I am now fluent in both Italian and Spanish. The latter is very easy to learn, apparently.

Over my three years, I have spent a grand total of £479 million on twenty eight players, while selling sixty one for £337 million. I am now sneaking into the Hall of Fame picture also. Tucked into third place amongst English managers, I sit between Brian Clough and Bobby Robson. It’s a bit depressing to see no recent faces among the English selection, but that’s football, I guess. Here are my season statistics, and those for my overall career: