The deal going into the season’s final month is straightforward. Five more victories and it doesn’t matter what anyone else does. For now, we can finish as low as fourth, but that would take both a collapse of monumental proportions on our part and constant wins from the other three. We just have to hold our nerve. And beat Real Madrid in the Champions League return match. 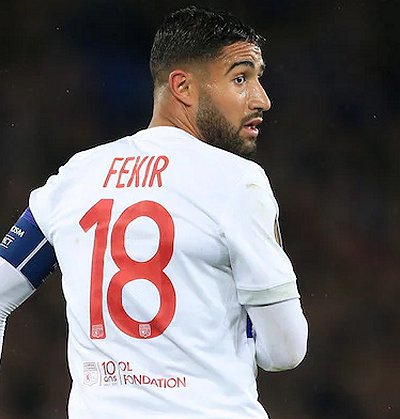 To clear things up, this game is first up, a grudge encounter at the Bernabeu that is finally balanced enough to make me name my strongest eleven. The home side is of a similar mind, fielding the enterprising Nabil Fekir behind Luka Jovic and Brenner, and it looks as though it may pay off in the tenth minute when the former runs through the gap between Skriniar and Torres, collects Ceballos’s pass and volleys home. It’s a training ground goal to concede, one for which I berate the players as I don’t want us to lose concentration so easily. At times like these, when everything is on the line, you need your best players to produce. Twenty-three minutes later, Messi emerges from another Real attack and dribbles deep into their half. He picks out Harrington Kane, the only player in front of him and slackly covered by Ceballos. The English striker is able to keep away from his marker and sidestep Courtois before hitting a sweet shot into the net.

The Real players try to find another gear. They’re 3-1 down. The fans are angry and those efforts to redress the balance become more constant and frantic. Now requiring three goals against a notoriously difficult to beat defence, they end up collects as many bookings as shots amassed. They’re also open to the counter, something that devastates and finally kills them off late in the game. This is the moment for Antoine Griezmann, a fresh pair of legs for the inconstant Fati, collecting Torres’s through ball and cutting inside from the left wing, firing through the keeper’s legs to make it 2-1 on the night. And with that the illustrious Madrid side are undone. It’s been an even game, but defensively we have shown our quality, particularly the solid Torres, and we have also done enough in the attacking quarters to see ourselves safely over the line.

Liverpool await in the Final, to be played at Stadion Munchen, the hyper-modern home of Bayern Munich that has always looked to me like a gigantic Liquorice All-Sort. The Scousers played a pair of 1-1 draws against Manchester United, the two titans finally separated in extra time by Mohamed Salah’s sweet left foot. You may recall Liverpool turning out to be impassable opposition for Napoli, so there’s something of a personal grudge match about this one.

But first the league. Our march to the title begins on a perfect spring afternoon at the Camp Nou. Our opposition is Cadiz, who are turning their promotion season into a fine effort to beat the drop. With little left to play for, they should be beatable and the four goals we put past them are testament to that. Tammy Abraham states another strong case for being added to the squad permanently, scoring twice and looking like the consummate thirty-goals striker that any side wants to add. In fairness, when you have the likes of Griezmann and Dembele providing quality assists on a plate it would be impolite not to convert them into goals, don’t you think, and Spanish defences haven’t yet learned that Tammy needs to be covered in much the same way they are all over Kane whenever he plays. Gerard Pique heads in from a Griezmann corner on the strike of half-time, and Coutinho adds a fourth to keep the run going. 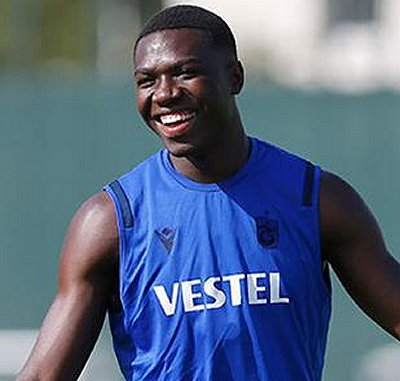 Sporting Gijon (Hee-Hon) are next. Another mid-table outfit, earning plaudits by doing things the right way with a mainly Spanish set-up. I should have precious few doubts about our resolve by this point, but Hee-Hon overturn us. Striker Stiven Plaza shocks our defence with a goal in the fifteenth minute, and then conjure a winner after Tammy Abraham’s reply by unpicking us on a set piece, Modibo Sagnan heading in the Pipi free kick that we appear to stand and watch. Now, anyone can lose at any time they like, but I’m criticised harshly after this, as is the team, and I can’t argue with the slings and arrows. Gerard Pique is a particular target for my ire; he’s slow, running at half the speed of everything around him, and it’s a concern. On the whole we are nothing like good enough here, expecting to show up and be gifted the points by sheer virtue of who we are, and that just isn’t how football works. A diffident and poor evening’s work.

Villarreal overcome Atletico to end the other Madrid team’s slim chance of catching up with us, and we have to lick our wounds at another away ground, El Sadar, home of Atletico Pamplona. Jose Angel Ziganda’s outfit look relegation bound. They should be easy enough to see off, but the Hee-Hon reverse has added an element of tension that perhaps is exactly what we need in order to stay focused during the run-in. Real continue winning, and the straightforward 2-0 result we produce eases our nerves somewhat. It isn’t terrific from us. A Lionel Messi double shows that when we’re in any doubt about our abilities it takes a true legend to step up and lead the way, and perhaps more importantly the defence steps up to allow nothing more than two off-target shots on goal. But this is the Little God’s game. He’s incredible, dazzling the crowd with his skills and commitment, and leading them to feel there’s probably nothing they could do against such a divine player.

In midweek we’re at home to Real Hispalis. Potentially they’re a difficult opponent, but we make short work of them at the Camp Nou, with goals from Coutinho, Harrington Kane and a late Antoine Griezmann piledriver to which they have no response. Enterprising midfielder Thiago Almada is dismissed after an angry, frustrated performance, which sums up their evening as they make little impression on Ter-Stegen’s goal. An efficient and dominant victory, which is all I can ask for at this point in the campaign.

By the time we go to Levante we are finally at match-point. Win here and it’s over. The home team are capable, notably Nico in midfield, who’s on loan from ourselves and will surely earn a place in our squad next season, but Paco Lopez’s team have secured their mid-table berth and have precious little left to play for. It’s a 3-0 win against a side that places nine men in defensive-minded positions, looking to put players behind the ball but quite unable to stop our clear virtuosity as Pau Torres, Antoine Griezmann and Bruno Guimaraes cause the damage. Another Lionel Messi masterclass, the diminutive God buzzing everywhere as he plays himself into space, fields defence-splitting passes as a matter of course and generally becomes impossible to contain. Of the three remaining old legends in the side, he’s assuredly the one I can’t imagine a near future without. Sure, see off Busquets and Pique, but lose Messi and we are absolutely the lesser, and I can’t imagine that scenario in the short-term. 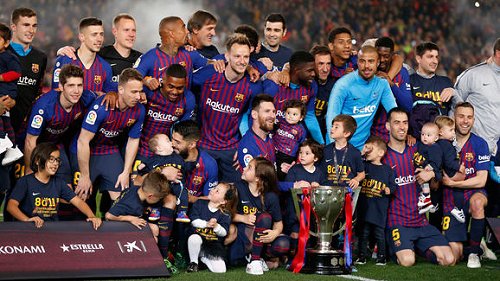 Title secured and the remaining two games remain as an extended celebration. We have Liverpool to play in early June and it’s important to keep my best players fresh for it, so I field some lesser lights and see off Alaves 2-0 and treat the supporters to a  6-0 demolition of Girona. Both games feature starting turns from young right winger Ilias Akhomach, the player selected to ultimately take over from Messi (no pressure then) but who puts in two superb performances, scoring against Alaves and effervescent in the Girona win. The finale is a delicious display of what we can do. Gerard Pique earns some credit for his two goals in the final victory, a committed display that contrasts with the distracted work put in by Umtiti (nobody wants him, and he can’t be surprised after this shop window opportunity produces absolutely nothing). Frenkie de Jong plays both games in defensive midfield, my effort to find a place for him in which he can excel, and where he neither impresses nor fails. Manchester United have been long-term suitors for him, and despite his obvious talent the Dutchman has been our one midfielder to struggle to assert his abilities and I may be tempted into letting him go for the right price.

Here’s the final league table. Despite the humiliation against Hee-Hon we were very good value for our favourite status, winning La Liga with something to spare and emerging with Messi considered the division’s best player, an accolade against which I have no argument. With this and the Spanish Cup in my pocket I could actually look elsewhere at this point, but it’s been a fun year in charge of a good team, and for now I want to go nowhere. You don’t often get the opportunity to enjoy a side like Barcelona, after all, and despite our success it feels like a mission that hasn’t yet ended.