We have one final game before the extended winter break, which is an away day at Borussia Monchengladbach in the Champions League. Barca have qualified, so this is the completion of a commitment rather than a burning desire to strut our stuff, but there’s the possibility that we can gain top spot in Group F. It depends on PSG chuffing their tie against Ajax, which would be unusual because they have home advantage and the Dutchmen have been pretty lacking in attack.

As it turns out, the Parisian giants win 2-1 and we struggle to a 2-2 draw, so neither game works out in our favour. For a time, it all seems to be going to plan. Ansu Fati celebrates his new deal by scoring a first half brace, and Ajax equalise in the French capital after Marquinhos’s early goal. Borussia are decent opposition, though, and as Anton Miranchuk and Victor Tsygankov provide two second half goals for the home side I’m left to rue the fact that I fielded Pique and Umtiti in central defence. There’s a clear hierarchy in ability levels among my centre-backs, of which these two are the lesser pair, and it shows. Jordi Alba caps off a pretty poor outing with a damaged foot, which might ruin his chances of playing for Spain in the World Cup. The Germans are decent. Allan Saint-Maximin tortures Alba throughout, though Marcus Thuram on the left gains little traction against Bellerin.

Still, we remain in the competition and that’s what counts. With no football left to manage for a while, I take a moment to assess what I think of my squad. There are a few players here with bona fide legend status and this protects them; the rest are in my thoughts as follows: 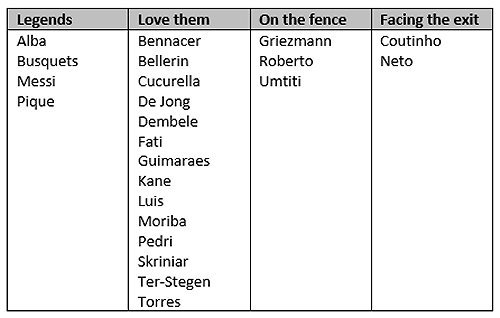 There’s a half-chance that I can find a new home for Coutinho. Any deal will likely involve us losing money (he’s valued at £62 million, and we paid a lot more than that to get him – we won’t get it) and paying a portion of his bloated salary, and this is likely to kibosh his chances of moving. I’m happy to see the back of Neto, but as long as Ter-Stegen remains fit then I can wait for now. Antoine Griezmann has been a disappointment, I feel, while Sergi isn’t as good as Bellerin at right-back, neither can he claim to a steady stake to a place in midfield, and I’m starting to regret handing a contract to Samuel Umtiti. He’s okay, but that’s about all he is. We can do better.

Encouraging to me is the performance of some of our on-loan young guns. Here are some highlights:

Barca players participating in the World Cup are: 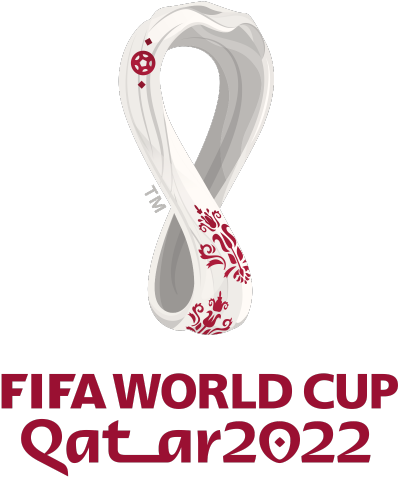 Of the above, some very illustrious teams, who do you think will still be participating by the time the competition hits the Quarter-Final stage? If your answer is Portugal and the USA, then check out the big brain on you. Spain batter their group before losing 1-0 to Colombia in the Second Round. This also does for the Netherlands, a real force until they collapse to the surprising immovable object that is Jamaica. Ecuador see off England and, in a pair of shock results, Japan beat Brazil 2-1 and USA triumph on penalties over a fractious France side.

By the time we travel to Ferrol to play in the First Round of the Spanish Cup, Florentino Luis’s participation in the World Cup has also come to a halt as Poland see off Portugal, and I can name a full-strength team. The First Knockout Round of the Champions League hands us a draw against Chelsea, the first leg to be played at home. My experience of Barca in Europe is indomitability at home and complete fragility on our travels, so we’ll have to see how it goes. Real Madrid are the only other Spanish side remaining – they have the small challenge of Bayern Munich. Napoli have advanced and will take on Paris Saint-Germain. That’s like a slap across the chops for my old boys, now managed by Jose Mourinho and at the top of Serie A once again.

Racing Club de Ferrol are in the Spanish Second Division Pro A, confusingly the third tier of the league structure. Existing as a team for more than a century, the Green Devils have never participated at our level and should be a good opportunity for my players to regain their match fitness. An easy evening’s work is on the cards. In our lovely pink away shirts, we put three unanswered goals past the home team. Milan Skriniar, Ansu Fati and a superb volley struck from distance by Bruno Guimaraes cause the damage. Ferrol have one shot that sails harmlessly wide of Ter-Stegen’s goal. Jordi Alba goes off injured, a consequence of occasional casual thuggery by the lesser opposition. Luckily for him, it’s nothing worse than a bruise. In the Second Round we’ll be up against Lorca Deportivo.

We now enter a flurry of friendly games before the league calendar resumes. Playing in a mini-tournament at Stade Pierre Mauroy, home of Lille, we face Aberdeen in the Semi-Final and win 3-0, all our goals coming in a second-half blitz after a dissatisfying first. Ousmane Dembele, coming on for Messi, inspires everything that’s good about us, and I will confess to being increasingly impressed with the French winger. His reward is a pulled groin, which will remove him from the Final. This takes place the following evening – our opponents are Sampdoria, old friends from my Serie A days. The Genoese side are no match for us – we win 5-0, generating an xG of 3.05 and barely giving the opposition a sniff. This time, Pau Torres is the victim, emerging with a twisted ankle that will remove him until mid-January. 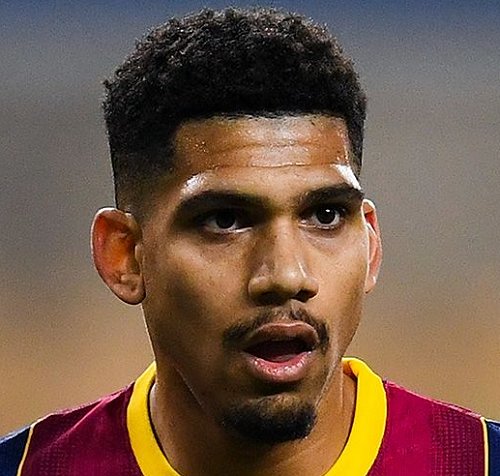 The loss of Torres makes me think about the relatively thin 23-man squad we have. Another central defender would be useful, ideally one who is out on loan and can be recalled. Ronald Araujo looks about right for this back-up role. A positive showing for Levante wasn’t enough to propel him into Uruguay’s World Cup squad, but he’s making good progress and is improving. Talking of the Qatari tournament, the Final showcases two sides that could normally only dream of making it this far. It’s Ecuador versus Colombia, which produces a 2-0 victory for the latter side, James Rodriguez putting in a star turn as they win their first ever World Cup. As for Ecuador, perhaps they’re a nationality that’s worth scouting…

Our final friendly is against AC Milan in the San Siro. I have mixed memories this place, even if Luis Enrique is fielding an eleven of starters and back-ups, including the wrong Donnarumma brother in goal. By half-time we are a goal to the bad. Erick Pulgar’s penalty has made the difference, and they have largely gone on to dominate the first forty-five. Inspired by Aaron Ramsey, they’re being praised for their good use of golden oldies, which I take as a bit of a dig as we are nothing if not a set of former greats. The second half is all us. Harrington Kane scores a penalty in reply. Pobega is dismissed for a second yellow and we take full advantage, piling on the attacks until inevitably we produce a winner. Florentino Luis beats Donnarumma from a long-distance volley to make the outing worthwhile. It’s only a friendly and the result doesn’t matter, but still the first-half malaise concerns me.

My promise to the board that I would make no changes to the backroom staff has been completed successfully. I can at last begin to add to the four first team coaches that exist currently, and to transform training into less of a joke than it is right now. With ten days remaining until our New Year’s Day match at Villarreal, marking the resumption of La Liga hostilities, I look to recruit.

Inaki Bergara signs to work mainly on defending. With experience at Athletic Bilbao and Everton, the 60 year old was working for Roberto Martinez’s Belgian set-up before agreeing terms with us. Used mostly as a goalkeeping coach previously, I have actually found someone more appropriate for this role and have returned to Napoli to recruit Alessandro Nista. 57 and costing £800,000 to relieve him from his contract at the San Paolo, I credit Alessandro with transforming Alex Meret into a top-class keeper, not to mention his great work with young shot-stoppers. I go to Bilbao and return with Marco Ianni. Once a lower league footballer, he has developed a fantastic reputation for working on attacking play, which is something we could use. Finally, English fitness coach Anthony Colbert signs for us, and all these changes make our backroom staff as a group look fairly healthy: 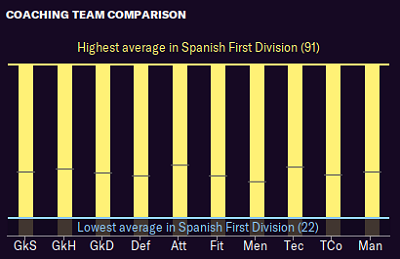 A nice Christmas present arrives with the preview of this year’s youth intake. The detailed lines can more or less be ignored, but the statement ‘This is a terrific group of players coming through, and has the potential to be a real golden generation for the club’ is an eye-opener. Barca standards are high, so I now expect to see something quite special amongst this lot.

It’s awards time at the close of the calendar year. Lionel Messi is named World Footballer of the Year. It’s his three-thousandth win, another accolade to add to the haul, but he’s beaten Salah and Mbappe to claim it and I think that is pretty fantastic. The Argentinian legend dedicates to award to me, which I can only imagine is because he’s run out of family and friends for his dedications. Still, it reminds me that we won’t have him forever. Finding a long-term replacement for the Little God will not be easy, indeed it’s night on impossible as he’s a once in a generation type of superstar and pretty much irreplaceable. All the same, we’ll have to try.