The New Year opens with some promises to keep and awards to announce. Fabian and Grimaldo have both complained to me that they aren’t playing as often as they would expect. I agree to give both more time in the field, as they are fair concerns to express. Of course, they are talking to the newly re-inaugurated Manager’s Manager of the Year, though that counts for nothing. Alex Meret wins the World Golden Glove, a recognition of the outstanding number of clean sheets for which he’s responsible. Both he and Kalidou Koulibaly are named in the year’s World Team, rubbing shoulders with some very illustrious company. The latter is the African Defender of the Year. Victor Osimhen is picked as the best African striker, with Chelsea’s Hakim Ziyech picked as the overall best footballer from that continent. 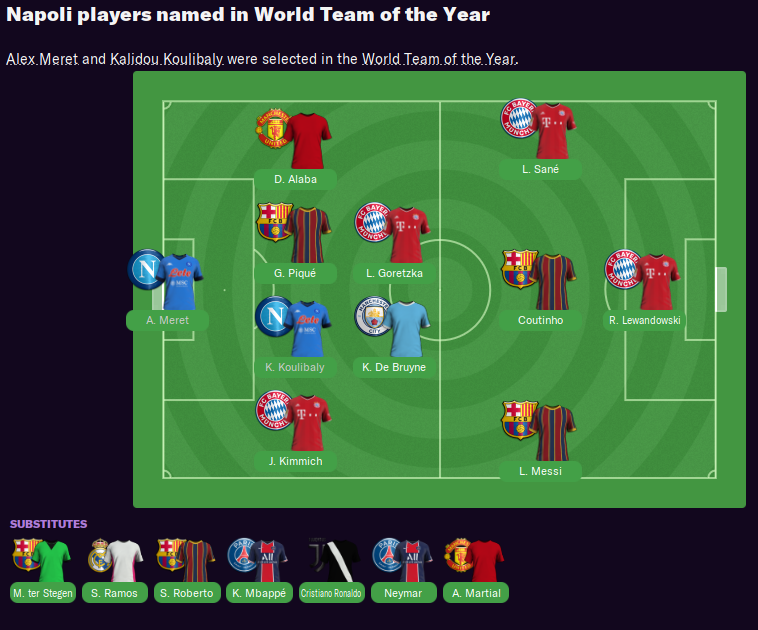 Eric Garcia is our best trainer at the moment. He’ll need to be. There’s a new focus on him with Koulibaly playing in Africa for up to a month. Our away day at AS Roma presents a number of selection problems. Lozano is out for the foreseeable future. We can’t choose from Kouli, Boga or Osimhen. Insigne isn’t quite right yet, but can be picked for the bench. Garcia partners Manolas at the back. Politano moves to the left wing with Orsolini on the right and Schick playing as striker. I’ve fired off a loan offer to Arsenal for Gabriel Martinelli, to boost our options. The potential sticking point is the Brazilian’s wish to be a regular starter. We can’t offer him the amount of playing time that he wants, so it’s with fingers crossed that I load squad rotation status into the bid. Martinelli, young and capable, would be a decent addition to the side. It’s his youth that matters; we’re up to the limit in squad numbers, and he will escape registration.

Roma are a good side, with a couple of players – Pellegrini, Veretout – who I really admire. That said, few improvements have been made to their ranks and there’s a reliance on golden oldies like Dzeko and Mkhitaryan that have slowed them down considerably. The game is a super dull 0-0. We have the lion’s share of scoring opportunities, but neither Schick or Insigne get to take advantage. I think we might have broken the deadlock when Garcia nets from Politano’s free kick, however he’s clearly offside. Late on, Veretout puts in a dangerous challenge on Politano that has him seeing red. I order the players to press their advantage, but they seem to interpret my instruction as ‘play for the draw’ and the time simply peters out.

It’s never a bad result to force Roma to a draw, however everyone is aware that we need to keep on winning to retain the advantage over Juventus. They win 2-0 away to Verona and reduce our lead to four points.

Schick and Orsolini were especially poor in the Roma game. Better is expected, and there’ll be a stiff test to come with Inter Milan at home the following weekend. Now managed by Ernesto Valverde, the opposition have been forced to cope without two big money departures in Martinez and Skriniar. The latter is replaced with Ajax’s Nicolas Tagliafico, which is in my eyes a very sound choice. Their main strengthening is on the flanks, a fair area to work on as previous manager Conte had little time for attacking wingers. Their incoming players are Julian Draxler (£24.5m from PSG), Marco Asensio (from Real Madrid, £17m) and Stephan El Shaarawy, at one point the bright young talent of the Italian scene and now at the Giuseppe Meazza, having negotiated a move from China. I’ll confess the winger was on my radar, but his enormous Shenhua wages looked like a barrier and Inter are paying him the best part of two hundred grand per week.

This one is seen as a potential revenge mission for Politano, a Nerazurri reject and now playing a starring role for our good selves. Instead, this becomes the stage for Patrik Schick, played in attack by default and justifying his selection with an excellent hat-trick. His second is the best, not so much for his poacher’s goal but for the approach play by Castrovilli, who seems intent on weaving and dodging his way past every opposition player before putting in the killer cross. Riccardo Orsolini adds a fourth to make up for his leaden work against Roma. Towards the end, Grimaldo fouls Eriksen just inside the box, rather a cheap penalty to give away, and either Romelu Lukaku makes no mistake, or Meret continues his proud record of being completely incapable of saving a penalty. Still, 4-1 is a smashing result against a side that concerned me.

Sebastiano Luperto leaves on loan to Bordeaux, and Gabriel Martinelli signs for us. With Lozano unavailable for up to two months still, his input will be most valuable. Milan are after Grimaldo to the extent they are making actual cash money offers for him. I’ll accept no less than thirty-five million.

Cup matters take over. We’re up against Hellas Verona in the Coppa. It’s a competition we really have to try and win, and we entertain the Mastiffs on a mild and sunny January evening that makes me really appreciate working in a place like Naples. Martinelli starts on the left wing, and at half-time is moved into the striker’s role as Schick has been frankly anonymous. The Brazilian is marginally better, but it’s Lorenzo Insigne who makes the difference, introduced after the break and then going off on a solo run and firing beyond the keeper from a tight angle. A great goal, befitting the player and making the difference as we produce a leaden 1-0 result. There are fewer than 17,000 supporters in the ground for this one, and they’re right to stay away. We have played complacently, and I’m forced to let the players know it.

Hopefully they can raise their game at the weekend, when we face Internazionale again in the Super Cup Final. Last season, we did Juve to clinch the trophy and it’s something to defend, though in my heart I would far prefer us to work through the league schedule instead. The opposition will showcase new signing Donyell Malen here. The striker has sealed his £66 million transfer from PSV as their replacement for Martinez. He doesn’t have quite the Argentinian’s finished product, but he isn’t far off and we will have to respect him. Meanwhile, Milan refuse to pay the £34.5 million we require to allow them to talk to Grimaldo. It’s a waste of time; the player isn’t even interested in going. 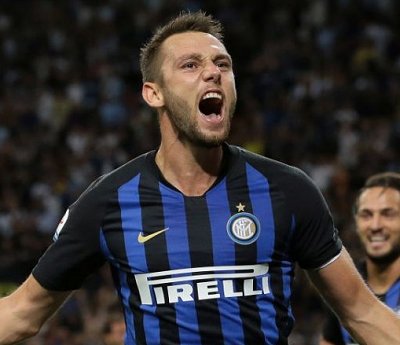 The Super Cup is staged in Saudi Arabia, at the King Saud University Stadium. Inter score in the first few minutes when Stefan De Vrij heads in Asensio’s free-kick, and then we labour – and completely fail – to produce anything in reply. Schick is awful, Politano and Zielinski dreadful, Insigne surprisingly crap. Even after Barella has been dismissed for a dangerous tackle we are unable to press our advantage. Basically Inter have managed us, neutralised our attacking threat. Grimaldo and especially Fabian come out of it well enough; the rest are poor. They triumph in the cheapest won trophy you’ll ever see, and while the Super Cup doesn’t really matter ultimately, I’m gutted.

Juventus beat Bologna on the road and move to within a point of us. We’re back in Italy and return to the Coppa, facing Torino at the San Paolo. They’ve just appointed Hermann Hreidarsson as their new manager and no one knows exactly what to expect from him, however they aren’t as good as we are and we really do need to put the Inter defeat behind us with a win. It’s no classic. Despite peppering their goal with shots Sirigu is imbued with the spirit of Walter Zenga, dealing with everything, and if the opposition know how to do anything then it’s to defend in numbers. In the end it’s a classic set piece goal, Armando Izzo heading in a bullet from Zielinski’s corner kick, which makes the difference. Despite the narrow margin, this stands as a well worked victory that leaves me sanguine. Less assuring is the news that Juventus await in the Semi-Final, which means two additional matches against the Old Lady. In the other half of the draw Inter will play the winner between Atalanta and Lazio. At least the sort of complacent work we put in to let Udinese ease past us last year won’t be an issue.