The players have gone on their holidays or are off to represent their countries in South America and the European Championships. For me, it’s time to take a deep breathe, relax with a… … … … Pepsi Max, and look over what has just happened.

I’m not here to advance the legacy of SSC Napoli, but my own pursuit of glory. In Season One I have added two trophies to the cabinet – the Serie A title and victory in the Europa League. In truth, the former was always on the cards if we achieved consistency against the kind of teams we should be able to beat, and that’s exactly what happened. The best Italian sides will always give us a game, but get beyond these and what’s left is a rump. I am a lot happier about winning the continent’s lesser cup competition. After a certain point it’s always a lottery. Injuries, fitness and the good old luck of the draw are factors, so it’s a pleasure to have got this out of the way so quickly.

Still, our failure in the Coppa Italia guarantees at least one more year in Italy. Not that I’m complaining. My reputation is improving along with my language skills, and despite some concerns about the ambition at the San Paolo it’s a good club to take charge of.

A year featuring three trophies (don’t forget the Super Cup!) takes in the success of my signings. Riccardo Orsolini was the best. The right winger ended with a 7.09 average and ten goals, and on the cusp of making it into the Italian national team. Alex Grimaldo was excellent if troubled with injuries and Armanda Izzo achieved a 7.10 average across his twenty-seven appearances, always rotated for Koulibaly and Manolas and letting down neither player by replacing them.

While the board remain tight with their purse-strings Napoli’s reputation and their financial pulling power grew. A news item that was received shortly before the end of the campaign offered a hint to their attitude, as it was revealed we have the highest percentage of our turnover being spent on players’ wages within Serie A. That figure is 62%, and it’s a really unhealthy place to be. Clearly we either need to (i) cut costs (ii) increase our commercial income (iii) fill the stadium more. Perhaps now we are a Champions League club, things will begin to improve.

I am named Serie A Managers’ Manager of the Year, and if I say so myself it’s richly deserved. The fans name Koulibaly as their Player of the Year, again wholly warranted as everything was built on our ability to defend. Alex Meret, who has just signed a new contract, is the Young Player of the Season.

Records are broken. Meret has claimed the most clean sheets in a season, with a stonking twenty-seven. Matteo Politano wins the most Player of the Match awards, with seven, and for good measure is named Serie A’s best player. On the downside, Diego Demme is our dirtiest baller, picking up fourteen yellows and one red. That’s quite impressive considering he played second fiddle to Bakayoko. 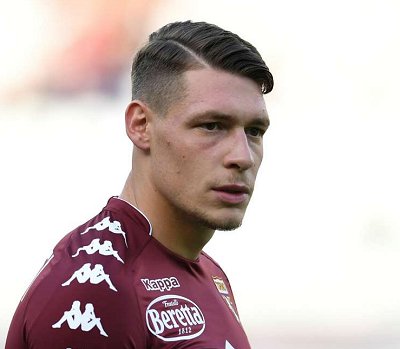 Andrea Belotti is the division’s top scorer, with a smashing 29 strikes. That’s a really good haul, putting Mertens – the Neapolitan who finished highest in Serie A – with a shabby 15 in the shade. Jordan Veretout is the highest rated player, which leads to the player requesting to be transfer listed and courting the attentions of Manchester United. We are credited with having both the signing of the season (Orsolini) and the worse, in poor old Alex Grimaldo. It’s such an undeserved claim to fame. When not injured, he played really well for us.

Claudio Zanchetta of the Italian Football Free Press writes ‘It was a superb season for the Partenopei as they claimed the title to back up their pre-season credentials.’ Honeyed words from Claudio, though we were third favourites as I recall, with Juve tipped for another year of domination.

Talking of whom, Andrea Pirlo is sacked by the Old Lady and they’re looking for a new sucker. I’m not tempted, indeed the vacancy that does attract me momentarily is the hot seat at Everton. The Toffees have worked through Ancelotti and later Howe, and neither manager is able to save them from relegation from the Premier League. I have spent my entire life knowing Everton as a top flight club, sometimes a good one, and the prospect of lifting a grand old club back to the top has its sense of promise. Maybe another time.

Staying in England, Manchester United claim the Premier League ahead of Liverpool and Man City. Ronald Koeman proves to be success at Barcelona, lifting La Liga while Real Madrid can manage nothing better than fifth place. Lionel Messi is at his best here, scoring a staggering 8.02 average across the campaign. What a GOAT. In Germany, Bayern Munich lift the Bundesliga crown at an even earlier point than we manage, thanks as much to the ordinariness of the opposition as their brilliance. I would like to talk about an upset in France, however there isn’t one. Paris Saint Germain win by more than twenty points ahead of Lille. Barcelona beat Chelsea via the penalty shootout lottery to claim the Champions League.

For my part, I am considered to be very secure at the San Paolo, though the board expects me to deliver more entertaining football in the future. I have a 3.5 star rating (fairly good), with strong characteristics in media handling, tactical consistency and managing finances. I still haven’t fully learned the Italian language, but my semaphore is crazy good.