Things are going well, though I have this niggling feeling that we are acting as flat track bullies so far, reliably crushing underfoot the teams we should be beating but coming up a little short against reasonable opposition e.g., AC Milan. We will get another opportunity to see how we are progressing when we travel to Rome to face Lazio in November, otherwise it’s another raft of sides that we ought to overcome. When will complacency become an issue?

The board are happy with my work, conferring a B grade on me while expressing their dissatisfaction over some of the lower-than-expected fees I have accepted for transfer-listed players. That’s fair to an extent, though I am never prepared to have those I no longer want to be haunting the corridors of the stadium for very long, knowing they’re surplus to requirements and bringing down the morale. In addition is the impact of removing them from the payroll. Napoli have been generous with wages, and I don’t want anyone to be earning the big bucks without making a similar sized contribution.

We kick off November by unusually travelling to somewhere even further away from Italy’s heart than Naples, when we cross to Sardinia to play Cagliari. I remember going on holiday to Sardinia more than a decade ago; what a splendid place, endless beautiful beaches, the capital an unexpected delight as you climbed higher and higher and came across ever older parts of the city. 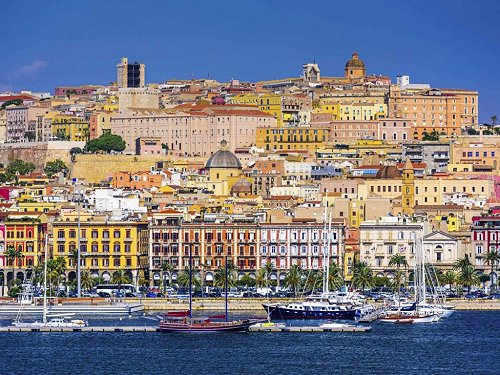 Most of Serie A’s sixth round has been played by the time we feature on Monday evening. Milan have travelled to Torino and lost 2-1, so the incentive is on us to pull clear with a victory here. I name my best eleven, including Fabian who has just been named the division’s Player of the Month. Our hosts feature Adam Ounas, an Algerian winger who is actually on loan from us; it will be interesting to see what he does, and hopefully he will remember the side on which his bread is buttered. They can also call on Brazilian striker Joao Pedro, who scored eighteen league goals last season, and legendary Uruguayan defender Diego Godin.

Their right-back is a thuggish hulk called Gabriel Zappa, who has the unfortunate job of trying to do a marking job on Lorenzo Insigne. Watching them work against each other is like witnessing a parent try to cope with a wilful toddler, only Insigne happens to be a bloody brilliant footballer, making a monkey of the defender when sending in a beautiful second minute cross for Matteo Politano, which couldn’t be more gift wrapped if the ball had a bow tied around it. Politano scores a second before the break, placed well to collect Zielinski’s pass to beat the offside trap to rocket into Cragno’s top corner.

And that’s about it, a professional and mature evening’s job of work in which only Mertens looks poor, as indeed many would when up against the waning yet formidable powers of Godin. He’ll have many better days, and it doesn’t matter anyway when Politano is in such rich form. The on-loan Inter man is now our leading scorer.

Two home games follow. The first is a Europa League tie against AS Omonoia Nicosia of the Cypriot First Division. They’re managed by Henning Berg, a highly decorated former Premier League defender who won many trophies with Blackburn and Manchester United. It’s fair to say that these are different climes for him. The standard of the opposition is exemplified by team captain Jordi Gomez, a 35 year old Spanish journeyman who can count stays with Swansea, Wigan and Sunderland among his lengthy alma mater.

For much of the first half nothing really happens, then Orsolini’s wayward cross into the box draws a penalty when Ioannou barrels Victor Osimhen over. It isn’t easy to fell a Nigerian beefcake, so the penalty shout is a clear one and Osimhen dispatches his shot into the bottom corner with consummate coolness. He makes it 2-0 shortly before half-time, a better Orsolini cross that he converts efficiently. Omonoia have been racking up the fouls and card count, and when Jordi Gomez is dismissed for a second yellow early in the second half they allow us to wail upon them. There are strikes for Hirving Lozano, Eljif Elmas and Armando Izzo, and a very late reply from Eric Bautheac – the opposition’s one big threat, who we are supposed to be keeping an eye on – dents the margin of victory a little, but by then everyone is thinking about what to have with that night’s pasta dish. Mario Rui is named Man of the Match for his two assists. With three victories we have already qualified from the group. 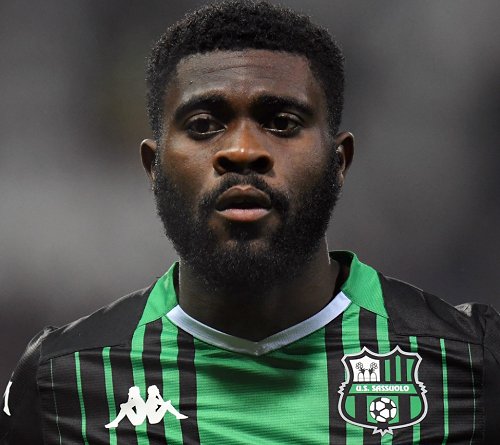 There’s just two days’ break between this and our next home encounter, which is a date with Sassuolo. The Modena based team, with their black and green strips and lovely nickname of the Watermelon Peel, contain two players I have already considered adding to our ranks – wingers Domenico Berardi and Jeremie Boga – and a midfielder who left in the summer. We really fancied being able to call on the services of Manuel Locatelli, but so did some very big sides and the Italian has bogged off to join Real Madrid’s reserves for a fee of £21 million. Their ranks also boast Maxime Lopez, on loan from Marseille, who I rather enjoyed having in my FM20 Derby side for a little while.

I make the usual appreciative noises about them in my press conference, whether I mean them or not, and wonder what it will be like to come up against a side that arguably punches above their weight and sits neatly in tenth place. The rotation of players – an entirely different eleven has been representing us in Europe – means that we should at least be fresh, with no injuries at all to worry about for now.

With two weeks of international football following this one, 35,800 supporters turn out to witness a routine 2-0 victory. The away side get one shot, a Kaan Ayhan free kick that drifts harmlessly wide of Meret’s goal. We’re ahead after eleven minutes, a routine headed goal from Kostas Manolas from Politano’s corner kick. Early in the second half Di Lorenzo’s cross is bullet-headed beyond the keeper by Lorenzo Insigne, and that’s it. That’s the match. I have a slightly queasy feeling that we have rarely shifted out of second gear here. We haven’t really had to, and that’s fine, but I’d really like to fill the stadium, and this doesn’t seem like the way to do it.

While the boys are off doing what they do, I ponder the form of Dries Mertens. After a flashy start our cult legend of a striker hasn’t thrilled the fans, and I am beginning to wonder when it’s the right time to start fielding Victor Osimhen more often. The Nigerian is playing in the Europa League, enjoying a slow introduction to his new life as a Neapolitan, but he isn’t going to put up with playing second fiddle forever. His country has just put four past South Africa with Osimhen scoring a hat-trick, as though the player is reminding me of his availability and sheer potency.

We have a big test next with Lazio at the Olimpico. Simone Inzaghi leads an experienced group of players that constitute a serious Champions League challenge and that puts them in our sights. Striker Ciro Immobile can score against anyone and is in especially rich form for his country, whilst any manager worth his salt would find room in his side for Sergej Milinkovic-Savic. The comparisons I have read in Corriere Dello Sport between the Serb and our own Fabian, as the decisive influence over our match, is a fascinating one. 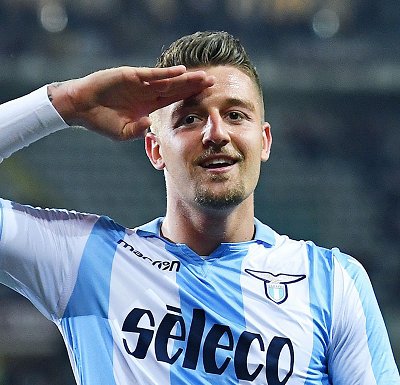 Before the game Fabian has a moan about wanting a new contract. His concerns seem fair to me and more important is the need to keep him at the top of his game, so he’s quickly offered a deal that will land him an extra fifty grand per week. The match is defined by ill-discipline. We pick up five yellow cards, while the home team have four players booked and Correa dismissed for a vicious elbow in the face of Koulibaly. This happens towards the end of the first half, when we are already a goal to the good thanks to Dries Mertens’s placed shot. But there’s adversity also, with Radu’s rough tackle on Politano removing the winger for what will turn out to be up to a month. Fantastic, our most prolific forward… Down to ten men, there’s little for the self-styled Eagles to do but look for breaks, which they don’t get. By the end both sides are leggy and tired, not the most exciting spectacle for viewers but it does the job where we are concerned.

Alternatives to Politano begin with Riccardo Orsolini, who is now in a position to do exactly the job for which he was signed. Lozano can play on the right as naturally as on the opposite flank, which reduces options on the left and could see Mertens dropping back. At a pinch I could use Zielinski here also, though it isn’t in his comfort zone to operate as a winger. In short, we’re a lesser team for Matteo’s absence.

In midweek we’re off to Cyprus to take on Omonoia. It’s already the case that these fixtures are turning into obligations, but we’re good for a 2-0 win, both goals courtesy of Riccardo Orsolini, who gets to enjoy the start of his sustained spell as our main right winger. He is removed at half-time with a suspected injury, and then shortly into the second half his replacement, Hirving Lozano, also goes off. Fortunately, Orsolini’s troubles are negligible, but the Mexican has incurred a pulled hamstring and will be unavailable for a fortnight. Great.

A battered a bruised set of Blues returns to the San Paolo for the visit of Genoa at the weekend. Currently bottom of the table, with two draws and six defeats on their shabby record, this has the makings of a home banker. The Genoese are captained by Domenico Criscito, to me an Italian playing legend whose twenty-six international caps suggest that things haven’t quite worked out as well for him in real life. They can also call on the services of on-loan Juve winger Marko Pjaca, who has mainly been played up front and to date has done squat for them. This hopefully is not the stage where all that changes.

As it is, we get to see why the team known affectionately as the Old Fool are where they are. The game’s a debacle. The visitors are down to nine men early in the second period, thanks to red cards for Pellegrini and Behrami. There’s not much more we can do but put five past Alberto Paleari, by some distance their best player on the day as it could have been a lot worse. Fabian De Bruyne scores a hat-trick. Piotr Zielinski finds the net, and Lorenzo Insigne adds a goal to his two assists to be awarded a 10.00 personal rating and the match ball. As walkovers go, if these were medieval times and the opposing team was being burned at the stake for religious heresy then it could hardly have been more punishing.

And that’s November, a month that ends with us opening a five-point lead in Serie A (click the graphic for a full-size version). How long this will last is anyone’s guess. December contains away fixtures at Inter and Atalanta, and Juventus at home, which should make for a more testing period. We are hopeful that the recovery time for Politano (up to two weeks) and Lozano (eight days maximum) continues apace.