The campaign opens with the visit of AC Milan, one of my personal favourite Serie A teams and that most sleeping of giants. They have started to revive out of their slumber recently, and in Stefano Pioli have stumbled across a manager who’s got them ticking. The Milanese signing policy is impressive, envious even. While Zlatan dominates the headlines, because of course he does, the vast majority of Rossoneri acquisitions have been young guns. They’re a youthful team, the likes of Leao, Saelemaekers and Tonali providing the promise of a fruitful future. As ever, the effort is anchored by Gianluigi Donnarumma, their first choice keeper for five years and somehow only 21. I’m envious.

This is a great gauge of where we are as a team. Meret starts in goal, behind a back four of Di Lorenzo, Manolas, Koulibaly and Grimaldo. Bakayoko is suspended so Demme starts. Zielinski and Fabian are our central midfield, behind a front three of Lozano, Politano and Mertens. Insigne is short of match fitness and makes the bench. 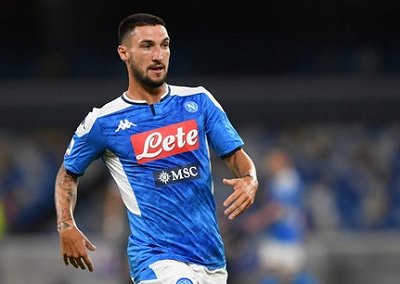 Everything seems to be going brilliantly when Matteo Politano puts us in front after just 34 seconds. A quite lovely passing move sees the winger latch on to a ranged pass from Fabian and putting in a tidy finish. Easy, right? Wrong! Milan go on the attack and quickly put us to the sword in their search for an equaliser. On the half hour mark, the obvious Zlatan nods them back into parity when he heads in a free kick. We go into half-time ever so slightly shell-shocked, threatening to be overrun and struggling to find any fluency.

I’m not happy and I let them know it. We switch to a positive mentality, which reaps rewards straight after the break but not in the right way. Diego Demme slides in to a challenge on Kessie, which earns him a second yellow and reduces us to ten men. There’s nothing else to do but revert to a defensive set-up, switching out Zielinski, Lozano and Grimaldo for Lobotka, Insigne and Rui. They’ve all been rubbish, and with the changes we slowly drag ourselves back into the game. Very late on, Mertens has a golden opportunity that Donnarumma manages to palm away for a corner, which sums up the match. It finishes 1-1, which is possibly the best we could have hoped for under the circumstances.

In the press conference I stand up for Demme, but I’m really disappointed with how things have gone. Anyone can get themselves sent off, but what niggles is that we let Milan gain command of the match too often and too easily. Politano and Fabian did well and the centre-backs were commanding under pressure, but elsewhere it was spectacularly poor. We especially allowed Hakan Calhanoglu to run things in the AMC role, which stands to me as an aberration. In our defence, Milan are a good side. It’s early doors and everyone is having to adjust to a new manager, a new way of playing and several new faces, but we need to improve quickly.

During the week I agree a new contract with Nikola Maksimovic. I’m not especially a fan of his yet would prefer not to lose him on a free at the end of the season. David Ospina is pitched in to start the following weekend, when we travel the length of the country to face Torino. This has all the makings of a banana skin. While there is on paper a quality imbalance between our two sides, Marco Giampaolo can always call on Andrea Belotti, one of Italy’s more consistent forwards in recent seasons. Bakayoko starts in defensive midfield, thanks mainly to Demme’s suspension. Insigne gets the nod on the left wing, earning his first competitive start. Otherwise we are unchanged from the line-up that unimpressed me against Milan.

What a contrast this one becomes. We tear into the Bull from the start and nudge ahead in the first ten minutes when Fabian latches on to Di Lorenzo’s pass, runs beyond the defence and slots beyond Sirigu. The build-up to this one is rather delightful. We aren’t playing with fluidity yet, but the players know to look for a man rather than rifle off a hopeful shot, which leads to lots of passes deep in the opposition half and putting maroon shirted defenders at sixes and sevens. Di Lorenzo is involved again for our second, a cross that Dries Mertens nets into the top corner from close range. It’s a cracking strike. The Belgian has the keeper right in front of him and is closely marked by Bremer, but still once he collects the ball there’s only one outcome.

We continue to punish them in the second half while Torino’s attacking effort never gets started. Bakayoko is doing his job splendidly, marshalling Zaza and Verdi, while Politano gets our third from a Mertens cross. Credit this one to the striker, who makes a solo run deep into the penalty area and has the wherewithal and calmness on the ball to hold it up as his teammates catch up. The victory is capped off by an unlikely goal from Giovanni Di Lorenzo, our hero of the hour. Having created from deep he now advances to pick up Fabian’s pass and launches an unstoppable strike to cap off a great personal effort.

A 4-0 win on the road, granted against lesser opposition but important for building team morale. After Milan I wasn’t sure what to expect from the boys. Could they adapt to how I wanted them to play? Was this going to amount to the briefest of challenges? One big victory does not a season make, obviously, and yet it’s moments like these that make the hard work, the hopes and dreams, looks as though they might pay off. Di Lorenzo is rated as the star man of all Saturday’s fixtures. I take the opportunity to let him know how pleased I am with his performance. He’s delighted.

We’re in the last week of the transfer window. A number of my players are on the radars of other clubs. Barca wants Manolas and Fabian. The latter’s future continues to be a matter of fevered speculation. For my part the Spanish midfielder already looks like an essential member of the group, so if we do sell him then it will need to be for big bucks. That said, the opportunity to recycle any monies generated into an exciting new recruit – Roma’s Lorenzo Pellegrini heads the list – is on my mind. We may have to move quickly…

Here’s the league table (click for a larger version) at the end of September. The goals bonanza at Torino has elevated us into third place, a finishing position I’d probably settle for if it was offered to me. I’ll finish this update with the Europa League draw. We are seeded first, alongside the likes of Arsenal, Roma and Spurs, the three sides that have a better coefficient than ourselves. We end up heading Group I, rubbing shoulders with what I would consider to be beatable opposition. The Czech Republic’s Viktoria Plzen are drawn next, then Midtyylland and Cyprus’s Omonoia follow. If we can’t navigate through this lot then I probably have no right to call myself a glory hunter.