The situation going into our away day at Arsenal couldn’t be simpler – draw or win and we claim the league title. Lose and we have two more attempts at it; alternatively we can rely on slip-ups from United and Liverpool. But it’s in our hands, and this is a hell of a place to try and get it. We have a good record against Mikel Arteta‘s Gunners, yet despite the usual caveats about their frailties they remain a Premier League big boy. They aren’t an easy team to beat.

In the afternoon kick-off United go to Chelsea and win 3-2. They’re intent on making the job as difficult as possible, playing like they want to defend their crown, but if we’re lucky it will be too little, too late from them. We’re in London on a sunny evening, playing in an Emirates Stadium that is some ten thousand short of capacity, which hints at things within Arsenal not being entirely happy. They’re fifth, which is about normal for them however the arrival of Arteta was meant to coincide with a return to their former position as Champions League perennials. Clearly we’ve had a say in them missing out, but it must be disappointing that they have not even started to reverse the slow decline that punctuated the later Wenger years. 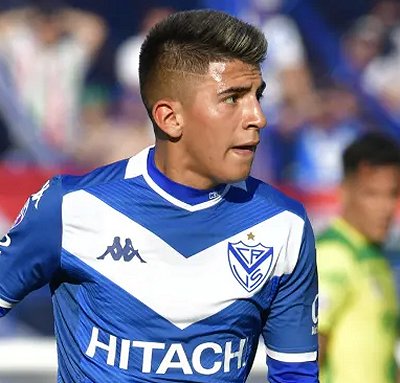 The big news for the home side is that Thiago Almada is not in the squad. The Gunners’ Argentinian attacking midfielder can be the difference maker in these fixtures, and it’s the suggestion that he’s going to Real Madrid that appears to be the decisive factor here. Famously Arteta refuses to field players who are not fully committed. You might like to consider it the Ozil Clause. Without Almada, they play Martinelli up front, supported by an attacking midfield trio of Pepe, Diogo Jota and Smith Rowe, the latter a onetime Derby loanee about whom I have very little good to say. We go with our holding midfield partnership of Hughes and Vieira supported by Bielik. Hlozek is once again playing at centre-forward. Wilson and Max Willian are on the wings.

At the end of the first half we’re looking at a snoozer of a contest. The sides are evenly matched and no one has produced anything of note. My Assistant Manager Chris van der Weerden thinks I should express my disappointment in our performance, and in truth it hasn’t been very good, but I couldn’t be more sanguine. Arsenal have done little, apparently content to hand the title over to us and help us to equal their record of going through a whole season unbeaten, and surely you’d imagine they would have a personal stake in preventing that from happening. I am happy to tell them to keep plugging away, though after anonymous showings Wilson and Max Willian are soon pulled off. As decent as Dubois and Tierney have been for the Gunners there’s no excuse for not trying.

Arsenal gain the advantage after an hour’s play. Saka has just come on, and he takes a free kick deep inside our half. The ball is eventually cleared after much huffing and puffing, but only as far as Ainsley Maitland-Niles, one of those midfielders who always quietly puts in a shift. He volleys through the Downfall game of legs and beats Butland at his near post. Damn. Or not. Several minutes later, a DCFC break sparked by Hughes finds Pellegrini haring down the left wing. He puts in his cross towards Adam Hlozek, whose coverage by Ake can be charitably described as loose. The Czech slots in to equalise.

We’re back in deadlock territory, and like many situations when finding a way through isn’t easy neither side is willing to go that extra mile. We don’t need to of course, and as the clock dribbles away we feel we’ve done enough. Sure enough, by the final whistle a little podium is erected in this hostile north London environment and we are given the stage to celebrate our triumph. 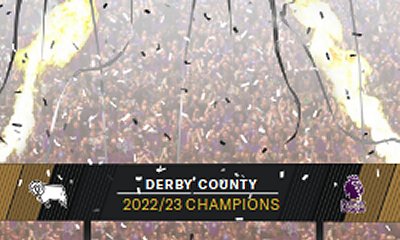 It’s the club’s first league title since 1975, our third in total. Even by the standards of a side that has finished fifth and third in recent seasons it’s a great achievement, the one that matters really, and whilst I have been reticent about declaring it our aim of the campaign there was always a part of me that felt we were going to be in the picture. The squad has improved, and having been in this position last year it seemed to me we could use that experience to apply ourselves better this time around.

It isn’t over for us yet. We will meet Arsenal again in the FA Cup final, and until then there are a couple of remaining league ties to get out of the way. My intention is to use some of the side’s lesser lights in these games and have my best eleven ready, fit and willing to battle the Gunners at Wembley.

Next up are Fulham at Craven Cottage. Our hosts are the only guaranteed relegated side, though Swansea and West Brom are both teetering. The ripple effect from our title win puts Jurgen Klopp‘s status as Liverpool manager in a bit of jeopardy, but he responds with winning his catch-up matches to make the board rapidly rethink their plans. For Unai Emery at Chelsea and Spurs’ Luis Enrique, however, it seems like a matter of time.

Going into this one, I make the decision to transfer-list Patrick Roberts. The English winger has never managed to graduate from being the good Championship winger we originally signed, and it seems best to me to put him out of his misery. The big contract Roberts weaselled out of me stands as one of my true aberrations in charge at Derby. I think we probably will be able to find a new home for him, but my chances of getting someone to take on his expected wages in full is somewhat more distant. All the same, Girona join Palace and Watford in forming an orderly queue for what amounts to his services. 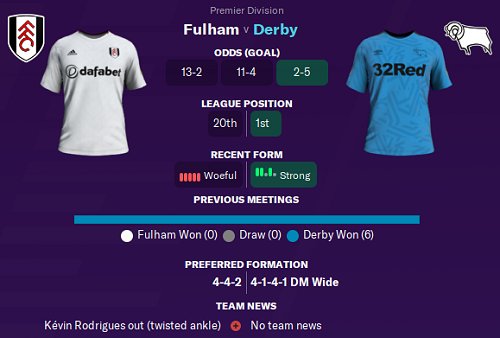 If ever a game has looked like it’s stacked in our favour then surely this is it. The Cottagers are in woeful form, and we take a wonderful record against them to their home. Only the fact we have nothing left to play for stands against us, I feel, though by this stage you can say the same for Fulham.

Nobody really likes kicking someone when they’re down. That aptly describes the home team, a disparate set of players going through the motions but whose morale is currently several storeys below the ground floor. Fortunately for them the result doesn’t matter very much to us either, but goals from Tosin Adarabioyo, Jude Bellingham and a late volley by Jeremie Frimpong seal the deal. I would say more, but winning here feels like coming out of a contest that was unevenly matched before a ball was kicked. Too easy. A more welcome note is that we bring Eddie Salcedo back into the side. He’s recovered from his hammy and plays the whole second half, mainly to develop his match fitness. There’s no goal from him, indeed it’s a quiet performance on the whole, but for once it doesn’t really matter.

The penultimate table of the campaign shows that we have crossed the ninety points barrier and remain undefeated, albeit with a stiff challenge to complete the season when we entertain Manchester City, who latterly are the Premier League’s in-form outfit. Can we get through it without losing? On the one hand no one is too concerned, but it would be a nice additional honour to aim for. More importantly, a week later we will be visiting Wembley for the third time this year to meet our date with FA Cup destiny, where Arsenal awaits. Derby have tasted glory in this competition previously, back in the black and white, post-war year of our lord 1946, so I think it’s fair to suggest that it’s been a while.