Aside from the cheer of seeing ourselves in first place, the table appears to have formed a five-team mini-league at the very top. This comprises of ourselves, Manchester United, Liverpool, Arsenal and Chelsea. Even though there’s a very long way to go in this slog of a campaign, the feeling is that one of these five will go on and win the thing. Newcastle are some way off in sixth.

For our part, we are celebrating the fact we haven’t yet lost a league game, in fact I don’t believe we have come off second best in any match at all during the term. As you might expect, our statistics are also very high. We’re second behind Liverpool on goals conceded, and in third place at the other end. Our scoring rate has witnessed a sharp rise, though the effect of losing Esposito for much of the season is yet to be felt, I feel. We have the fourth best record in the division for keeping clean sheets, with ten. Nearly as important for me is our disciplinary record. This was a real problem when we were first promoted and racking up the sort of card counts that would make no manager this side of Joe Kinnear’s Crazy Gang smile, but things here are much improved. We’re well off the top eight in fouls committed, sit twelfth in terms of yellow cards collected and haven’t been shown a single red. 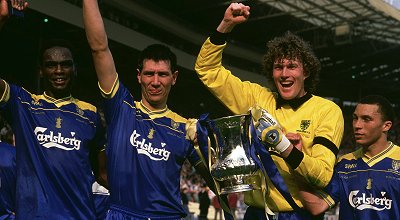 All this good work could come a cropper if we don’t maintain our high standards in one of the more difficult periods we face. At the weekend it’s Manchester United at home, played in near-freezing temperatures and the singular joy of sleet. The visitors are four points behind us and still smarting from our victory at the Theatre. Surprisingly by their standards no new faces were added in January despite the loss of Bruno Fernandes, though a quick glance at their midfield – they can chose from Pogba, Bentancur, Felix, Tielemans and Neves – suggests recruitment isn’t at the forefront of their needs. Ole-Gunnar Solskjaer of course looks to retain his league crown, and we aim to snatch it from them. There’s no point in denying it anymore – we’re gunning for the title, and why not? We might not possess their all-star profile but we have good players and we’re doing well. There’s no reason why it shouldn’t be us, and this game will go some way towards determining our fate.

Despite the lousy conditions the action is full on, two committed teams that give everything and work their charms to try and outfox each other’s defences. The standard of passing is very high. United have brilliant distributors and the sort of off-the-ball movement that means we have to stay sharp throughout, but we can’t do a lot about their opening goal. On their right wing is Magomed-Shapi Suleimanov, a tricky ball player who can dribble comfortably until the end of time. In the twenty-fifth minute, he’s racing into our half. Vieira makes a good challenge that parts him from the football, but it only drifts as far as Rashford who in turn feeds Shapi, still running towards goal. The little Russian does the rest, evading defenders and slotting his effort beneath Butland to open the scoring. It’s a goal that doesn’t fully reflect the tide of the game. We equalise within minutes, Frimpong putting in a cross that Ademola Lookman connects with from the left of goal. It’s 1-1 at the break.

Clearly this is anyone’s game, and we make a bid to claim it near the hour mark when Adam Hlozek collects from Moriba’s cut back pass on the edge of the area and lets slip a volley that De Gea can’t do a thing to stop. That’s the signal for the side to become more cautious. The visitors are outdoing us in terms of possession, if not in the shot count, and we now need to slow things down and leave with the points. It works, right up until the seventy-second minute when McKenna is clearly showed to have pushed Greenwood over in the area, gifting them an easy penalty shout. Paul Pogba takes it, a good shot that Butland reacts to superbly, falling to his right to parry it for the corner. Sometimes it feels like your moment, and this is ours. The fight goes out of United at that point and we get to see out the rest of the time, finishing with an important 2-1 victory.

Liverpool are now our nearest challengers, keeping up with our winning run in an irritating way because we can’t shake off their shadows. They have beaten Spurs at Anfield, not just winning but performing a demolition job when Bailey scores a hat-trick as part of a 4-0 show of strength. Mr Levy and the Tottenham board think they have seen enough and sack Manuel Pellegrini. It’s been coming for some time apparently, and in fairness it probably has after the north Londoners have faded horribly following their period atop the table for lengthy swathes of the previous season. Spurs are sniffing around Lookman and Hlozek, and the latter is having further coquettish fans fluttered in his direction by Arsenal. I’ve no intention to sell, though the prices being talked about are dizzyingly high, temptingly high.

Several days later and we get to play our catch-up match, which happens to be an away day at Anfield. Destiny catches up with you sooner or later. This fixture has been postponed several times already; part of me was hoping that it might be called off again and end up falling off the end of the schedule so that we wouldn’t have to play it, as if that has ever happened. On paper, it’s a good time to be playing Jurgen Klopp’s imperial empire of a team. They’re without Roberto Firmino, who’s out with a slipped disc for several weeks, while Fabinho is unavailable for a fortnight thanks to a hernia. This makes them only slightly less terrifying. To compensate for the absence of Firmino and for Salah, who’s now at PSG, Klopp fields Paulo Dybala in attack and places Jason Sancho on his right flank, Mane as always taking the other, so there’s no need to feel sorry for them.

The Pool are four points behind so even a defeat here can’t remove us from our fucking perch, but there’s the psychological dimension to consider also. We’ve been to Anfield and won, but there are times when we’ve tasted the inevitability of defeat also. Gifting the points to them feels as though it could precipitate another Scouse procession to the title, hell that might happen regardless of what goes on here. We’re determined to fight for our position though, and I name what I think is my strongest line-up. Bogle is asked to cope with Mane once again, while Bielik and Oxford have the happy task of keeping the ever-predatory Dybala under wraps. Chirivella, Hughes and Vieira make up a gritty midfield that’s built to soak up Liverpool attacks and pass them to death in sparking our own.

And we defend. A lot. All the time. In a first half that features little action in the opposition half, we are made to deal with Liverpool pressure. Butland makes point-blank saves from Mane and Dybala. Our central defence holds firm. Pedro is a titan in the defensive midfield hole, playing everywhere at once to sweep up any player who deigns to enter his space. They’re slick and quick, transferring smoothly to their flanks when the middle is congested but Bogle and Pellegrini are there to address the threat. In the second half the game opens up more. The home side are getting more desperate, leaving gaps, which we are reticent to break into because that will mean opening ourselves up, however late on there’s a move that ends with Butland saving from Mane. He feeds the ball forward and it winds up drifting to Patrick Roberts, who bursts into the opposition half, tricks Robertson into committing himself and then cuts inside, darting through on goal, launching a rocket that Alisson… saves! It’s a save and a reaction catch, the Brazilian keeper collapsing to the turf as though he’s holding the entire season in his hands.

There’s little dividing the two teams. Sure they dominate the attacking statistics, however our defending is leonine and we deserve to leave with the 0-0 result that surely stands as a point gained for us and two dropped where they are concerned. The very top of the table is as it was, and we are now eight points clear of Arsenal who have risen to third. Next up is what should be a more prosaic home game against Aston Villa, before we travel to the Spanish capital for our Champions League knockout tie, in a meeting with Atletico Madrid.