A week off in December ends with the traditional grind of two matches over three days. Wonderful. While you’re tucking into your Christmas dinner and being disappointed by the Doctor Who special we are getting ready for our visit to Everton on Boxing Day.

Such is football however, and while I have the break I do some crunching of the players’ numbers. Here’s how they stack up, showing the figures for those who have made more than five appearances: 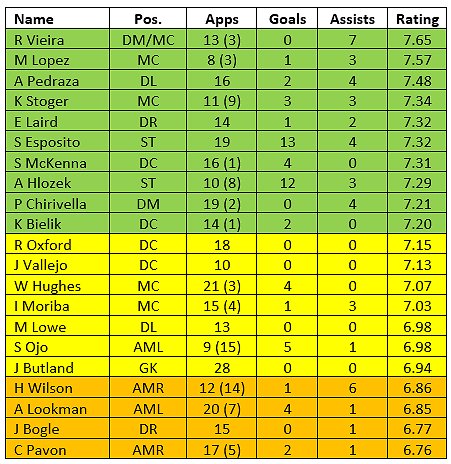 What have we learned from this? One clear lesson is that I’m probably right to be selling off Cristian Pavon, and that transfer-listing Kevin Stoger is almost certainly a hasty decision. Admittedly the latter is based on the player’s age (because I am ageist like that) and recouping a decent whack for him while he’s hot, but I am questioning whether it’s the right thing to do. He’s still there, available to you for £22 million with no likely takers,  and if things carry on like this – and with more performances like the commanding effort he puts in against Fulham, more on which below – then I can see him quietly being removed from the list and cuddled closely to sweeten him up. It’s worrying that all four Derby wingers are among the lowest rated of our players. Ademola Lookman is tailing off after what he produced in 2020/21, though most of his good stuff last season happened in its second half. Then there’s the Jayden Bogle factor to consider. Am I putting too much faith in a full-back who ultimately isn’t all that good, especially at this level, just because he’s a young, homegrown player? Just compare his rating against Ethan Laird‘s, an on loan sprite who is doing everything to justify his place in the side…

The game at Goodison is viewed as a clear chance for us to claim victory on the road, but I’m not so convinced. The Toffees overwhelmed us the last time we played them. They need to be taken seriously, Thomas Frank spending their money on some good squad additions like Jarrod Bowen, Otavio and Tiemoue Bakayoko. At the same time, talismanic keeper Jordan Pickford is now a Gunner, and Frank has replaced him with Zinedine’s son, Luca Zidane. Perceived to be a weak link in their line-up, all we need to do is pass the ranks of high class players to test him, which is not as easy as it reads here, whilst also marking Andre Gomes, who remains their strongest bridge to attacking play.

I pick a strong side for this challenge, thinking that I can afford to make changes for Fulham in – sigh – two days time. A freezing Goody Park is well attended, and plays host to something of a low-key affair in which we excel defensively. Everton have a lot of early chances, Calvert-Lewin particularly problematic with his great pace, but Bogle is alert to his wiles and plays a composed and, more importantly, a disciplined game in nullifying his effect. At the other end, Moriba is a busy presence and gets to spark off our best attacking move. Ben Davies is on the ball on their left flank. Moriba cuts all the way across and robs him, then sets off into their half where he picks up Esposito who’s racing into space and evading Mina. The striker rakes a pass across the penalty area, where Ademola Lookman is loitering, and he fires a shot that wriggles into the net beneath Luca’s body.

The goal comes against the run of play and I hope is a reminder to all teams that they need to respect us. We prepare for the Evertonian onslaught, which of course comes, and fervent it is, however we are solid at the back, where Lowe, Bogle, McKenna and Oxford all put in a shift of top quality. We hold them successfully until the eighty-eighth minute, when Otavio’s free-kick is steered home by Moise Kean. But it’s one of those afternoons for the home side. Kean’s about a yard offside, and we survive to savour a hard fought victory. 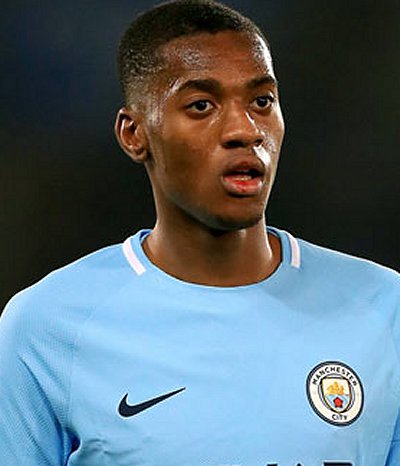 With the Pavon money banked I decide to reinforce our defensive ranks by placing a bid for City’s Tosin Adarabioyo. An initial fee of £7.5 million is agreed, with further instalments that will make the final transfer worth around £12 million, and City agree to meet £10,750 of his agreed weekly salary. As we are always stretching the limits of the wage budget, this is a welcome clause. We are one of a number of clubs interested in Tosin, and for now he’s sitting on our bid, hoping that someone offering him a bigger pay deal might come along, yet I’m hopeful of getting this one over the line. It seems like a very good deal for a 24 year old centre-back who carries a £25 million value.

It’s wet and cold in Derby as we entertain Fulham. I’ve never lost against them, and I don’t plan to change anything here as I make sweeping changes to my line-up to keep things fresh. Transfer-listed Stoger starts in midfield. There are big bids in for him from Shandong and DL Pro, both in the region of a cool £20 million mark and therefore too good for me to turn down. Otherwise, only Butland, Oxford, Moriba and Wilson from the Everton win keep their places. Rotation is the name of the game. Harry Wilson wears the captain’s armband with Hughes and McKenna on the bench.

We get to play with an attacking mentality, the effort being to exert our superiority from the opening whistle. Sheyi Ojo scores an early opener for us. Wilson’s corner is knocked straight at Rodak in the visitors’ goal by Hlozek, but rebounds to Ojo who just has to angle his shot out of reach and into the net. We then have one disallowed for offside – I agree grudgingly – before Adam Hlozek makes it 2-0. A routine back-pass from Akieme towards Costas is intercepted by the Czech, who races into the area and volleys home. Fulham defenders are struggling to keep up with him. When he wants to be Hlozek is unplayable. He’ll demonstrate this further in due course.

Before the end of the half Mitrovic has nodded one back for the away team. It’s a simple goal, Cavaleiro’s cross and Alek’s goal, made sickening because there are three white shirts surrounding the striker and he still does the business. Perhaps it’s a warning to me that I should at least take the opposition seriously. Then again, maybe not. Even as I drop our intensity levels, one man is determined to stake his own claim to greatness on this pitch. He’s Hlozek. The second period is transformed into his show, the Pride Park pitch his stage. He starts in the sixty-third minute, when he receives Pavon’s nod-down from Ojo’s cross, ignores the administrations of Costas and rifles home. Straight from the ensuing kickoff, Stoger robs the ball from perpetually confidence-free Ben Gibson and runs into the Fulham half. The only player ahead of him is Hlozek, the one defender the luckless Costas. The Czech collects, launches another volley, and it’s 4-1. His fourth and our fifth arises from a failure among the away team to clear their lines. Stoger takes a corner. Oxford picks it up in the box and is crowded out by defenders. Somehow the ball trickles out, as though from a ruck, and there’s Hlozek again to put it away.

By now, the Cottagers are waving white flags, begging for no more punishment, they’re already dead, and we coast on the crest of a 5-1 barnstorming. A highly satisfying afternoon’s work with no weak performances from my boys, though Wilson is fairly ordinary, possibly a consequence of him assuming the captaincy. Hlozek’s four-goal turn makes him an easy choice to receive the match ball. For Fulham, Sergio Akieme is identified as the main culprit, setting the tone with his horrendous mistake in making that erroneous back-pass. Only Mitrovic comes out of it with any credit.

We finish 2021 in a very healthy third place, and we hope to retain it or at least end the season in the top four. Like ourselves, United are sustaining their pressure levels with straight wins over Middlesbrough and Leicester, but City have dropped points after their goalless draw against Arsenal and are now four points behind. The next update is a cup special. January starts with West Ham in the FA Cup, before we play the first leg of our Carabao semi-final when we entertain Everton. It’s a lucky thing that we love the self-appointed Peoples’ Club, as January will see us line up against them on no less than three occasions.