In the approach to our crunch match at Anfield, we learn that the latest board takeover is once again not happening. Mr Morris has apparently ‘quashed the links’, and that is that, but the Four Four Two website claims this isn’t the end of the speculation, and we might shortly be working for new owners. To be reading about this in the media is a bit discomforting. I don’t think I’m being precious when I suggest I might prefer to hear the news via the horse’s mouth, especially as I am a key employee, but maybe it’s just the case that no news means there’s no news.

And in any event it’s all a distraction before the important matter of our meeting with Liverpool. The press bills it as:

I can’t argue with that. We’re fifth in the table, four points away from sharing the top spot with the boys from L4, yet beyond the mathematics the actual gulf between the two sides is enormous. Jurgen Klopp guided the Reds to a surprisingly poor fourth place in 2019/20, which wasn’t enough to do for his job prospects and indeed prompted little panic in the boardroom. They’ve made one significant signing in the summer – Zebre forward Paulo Dybala; you might have heard of him – and made next to nothing in player sales. Pedro Chirivella is one of the only two to leave permanently, whereas a number are out on loan, including Shaqiri and Origi. In short, they’re as good as they ever were, and that’s very good indeed.

Looking at where they went wrong last season, it appears they were open to the sucker punch at home. Defeats at Anfield to Everton, Leicester and Newcastle shouldn’t have happened, which gives me a little hope. As consolation they won the FA Cup, downing Chelsea 1-0, but they will have seen the Champions League campaign as a disappointment. Paris Saint-Germain did for them in the quarter-final, and while we all know that the French big spenders can beat anyone I would expect anything less than another final appearance will be viewed as not good enough.

After a slow start to this campaign their work is now taking on relentless proportions. Following defeat at Old Trafford in mid-October, they haven’t dropped a single point in any of their competitions. Their record in the Champions League reads at six played, six won, which includes two victories over Barcelona. Along the way Arsenal have been beaten 6-1. They’ve recorded a 5-1 slamming of Newcastle and put four past Chelsea. Their 35 goals scored overall puts them second behind Man City, but defensively they’ve been rock solid with a stingy ten conceded. They’re the best at creating chances, have already notched up 206 shots and they’ve been awarded more penalties than anyone else.

Every measure you choose to look at indicates nothing less than a comfortable home win for them. I’m writing these words before playing the game, taking a crumb of comfort from the organised brilliance of our away victory at the Emirates and hoping this means something. In the meantime I’m fully aware that Liverpool on their day can batter anyone. There’s little more humbling than watching defenders fail to deal with their forwards, allowing them to run riot, and even if they do then there’s the potential for Wijnuldum or Henderson to sneak through unmarked and cause the damage while Mane and Salah keep everyone busy and looking elsewhere. They’re a scary beast.

Beyond that, I’m genuinely pleased for the long-suffering Liverpool supporters who are at last seeing their team rise once again to the heights after a very long absence. When I was a kid they were unstoppable, like an inevitable machine steamrolling over anyone who was unlucky enough to be standing in their way. For that reason I kind of hated them, and just to show how long ago all this was I had a sneaking liking for Manchester United, the perpetual patsies, who seemed to spend endless millions on trying to catch up only to fall short, time after time. All that changed from the early 1990s, when Alex Ferguson finally found the formula for transforming his side into a perma-winning practice and Liverpool fell away handily at the same time. They’ve had a few false dawns since then. Under almost all their managers – Evans, Houllier, Benitez, flipping Brendan Rodgers – there have been moments to suggest the corner was about to be turned, only it didn’t happen until an outsize, charismatic German boss finally knitted together a unit capable of becoming the cream once more. 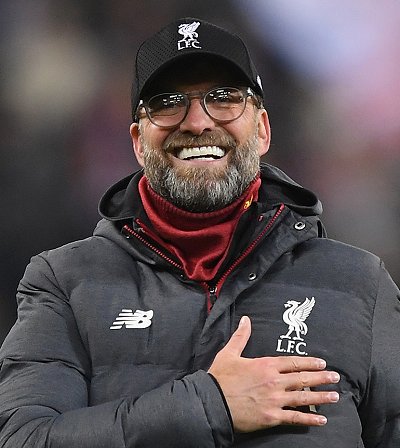 Klopp’s achievement at Anfield can’t really be understated. This is a hard time for any team to rise to the top, given the ubiquity of Pep’s Manchester City, and they are having to do it the hard way, establishing a pattern of consistent victories to reduce the odds. There are only a few times when I’ve looked at teams on Football Manager or even its predecessor and seen little I could add to improve them. The AC Milan side of the early 1990s was one of them. Liverpool circa 2019/20 are another. Sure, there are always better players out there; I would argue it’s impossible to construct the perfect squad. But seriously, there are so few gaps within Klopp’s roster that they’re the super-rare instance of a team that’s oven-ready, good to go from the minute you take over. I’m very jealous. We’d all like a side like that, though most of us need to construct them from the existing scraps that are good enough and it takes several years to get them to the requisite level.

Enough procrastinating. On to the moment of truth. Adam Hlozek is injured so it’s time for Bakery Jatta to earn his spurs in the line-up. We’re without the suspended Jayden Bogle, so I’m hopeful Ivan can put the moaning about his unfair treatment to one side and concentrate on keeping Mane under wraps. It’s a cool and wet Saturday evening at Anfield. I instruct my players to adopt a cautious approach. We know we’re in for a blitzkrieg from the home team, so we are to soak up the pressure as best we can and see if we can get any breaks. No one is especially optimistic, but we have beaten good teams before now and there’s nothing for us to lose. Everyone expects Liverpool to walk over us. Maybe they will. But there have been several times this season when we’ve bucked the odds, so why not do it here…?

The first half is a case of weathering the storm. The home side have a slew of scoring opportunities, and their pressing is fantastic. The pressure on us to recycle the ball quickly is immense, my boys having so little time to find any comfort, any rhythm at all, and their teammates needing to move constantly and unpredictably for us to keep possession. We have the edge in the latter element throughout, but mostly it’s a harmless effort to keep it away from marauding opposition players. The Pool have Dybala as their forward, and he’s terrific, with Lallana, Salah and Mane lined up behind him to present an attacking front of no little threat. That said, before the break they don’t create too many clear-cut chances. We defend like dogs, Stoger and Hughes dropping back to deal with the added numbers gathering to pummel our goal, and Chirivella is everywhere, tasked largely with shadowing Salah but otherwise demonstrating all the awareness that we’ve so far found priceless.

I don’t believe we have registered a single shot in those 45 minutes. We’ve rarely vacated our own half, in truth. If this was one of those 1970s matches where you can see where the action has taken place by how churned up and messy the pitch is, then the home half would be pristine, ours a mudbath. They’ve clearly had a telling off over the break because they push even harder. Mane has a go that cracks off Montipo’s crossbar. But they’re also creating gaps for themselves, and it’s in these that we strike.

Look how the home team try to rush players back to deal with our threat. Sebastiano Esposito can have off games like everyone, indeed I have private concerns that we may have another instance of Troy Parrott on our hands, where he starts well enough but descends into moribundity. Not a bit of it. An excellent strike to cap off our patient and probing attacking move, which also features excellent movement from Jatta as the willing playmaker.

Liverpool increase their efforts, almost an insane blizzard of red shirted marauding for us to cope with. Oxlade-Chamberlain has a crack that Montipo has to fly at full stretch just to tap the shot away with his fingertips. Curtis Jones gets the ball from the resulting corner. Ivan, who plays an immense game, steals the ball from him and clears it out of harm’s way. A poor pass from McKenna is intercepted by Jones, who works the ball forward to Salah. ‘Little Mo’ hurtling towards goal is one of the more terror-inducing sights in football; fortunately his shot is weak and caught by the keeper. Finally in the 94th minute Jones pokes it across the line from Dybala’s cross, and I think that’s it, fair enough, we gave it a good go. But it’s called back for offside, the winger clearly in front of our last defender when he collects the assist.

And so via a combination of luck, stiff and constant defending, VAR help and confidence, we come away with a heroic 1-0 win. It leaves us a single point off the top of the table, with some of the other big shots playing against each other. Manchester City batter Arsenal. Spurs and Chelsea see out a 0-0 snoozer. We have Manchester United next, another top side on the horizon, and who knows what will happen here…?