In general I write these updates at the same time as I’m playing the game. I have come into this post with no knowledge of what’s going to happen, and you can imagine my night’s sleep was not the most settled. Much tossing and turning took place, Mrs Side wondering what was going on as I moaned in my restless slumber – I believe in you, Jack… Harder Wayne, press harder… Tom, use the channels…

There are various mathematical permutations that will come into play as the last three fixtures are played, but essentially if we win any one of them we will be promoted as champions. That sounds simple enough, and surely it ought to be suitably motivating for the players. I’m working hard to downplay the significance. Going up is an enormous bonus for the season. None of us expected to be here, so it’s important that my message for them is to remain professional and play as well as they have been lately.

Our first match is away to Cardiff City. Brentford are entertaining Preston and Fulham have a tricky away day at West Brom. As our FA Cup epic showed, the Bluebirds are difficult opposition that we must take seriously. They have a very outside chance of making the playoffs, a combination of winning all their games and hoping that Boro or Leeds blow it, so they still have something to play for.

And we lose. It’s 1-0, a contest we dominate overall but they get the breakthrough when Ralls’s free-kick into the box isn’t dealt with and Mendez-Laing is suddenly on the ball, in space and with a clear view to the net. At the time 30 minutes have expired and we have an hour to get on level terms, but whatever we attempt nothing comes off for us. Clearly we’re giving the home team a hard time. They collect bookings enthusiastically, but they are stiff in defence and we’re unable to produce a goal. It’s vexing yet not entirely unexpected. This is a good side. As well as Chirivella plays in defensive midfield, winning the match ball for his excellent effort at the heart of the matter where he sprays passes around and is pivotal in halting any further damage, we’re poor in attack. Lawrence and Jatta don’t figure as well as they can; I replace them both but Whittaker and Phillips change nothing. 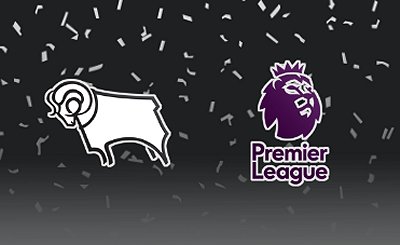 It turns out to be irrelevant. Brentford win their match and now sit four points behind us. The Baggies do us an enormous favour and down the Cottagers 2-0, which means we can’t finish any lower than second. No one especially likes to succeed based on results elsewhere, yet we’ll take it. We’re so pleased that the knock Lord Rooney took against Cardiff that will likely rule him out for the Leeds game doesn’t really bother anyone, least of all the England legend who can be seen rubbing his bruised thigh with one hand and holding the other aloft.

The division title may still be on the line, but for now we’re all too happy to care. I am advised of the board’s initial budgets for next season, which are way in excess of what we would expect if we were still a Championship side. We now have £650,000 per week to spend on wages, an increase of close to two hundred grand. Our new transfer budget is £38.46 million. This sounds great. I’m going to think about it later, when we start planning for 2020/21; for now it’s good to see there’ll be something to play with as we try to make ourselves Premier-ready.

I am forced to deal with media speculation about Max Lowe, our star left-back who is on the radar of seven top flight teams and coveted particularly by Crystal Palace. Of course my default reaction is that he’s going nowhere, yet I’m a little concerned over reports that he’s flattered by the attention being shown towards him. Max is valued at £7 million. We would want a lot more than that before we even entertain letting him talk to other teams, but my feeling is that we could recycle those transfer funds into additional talent.

Close to £5 million of my transfer budget is siphoned away instantly, via bonuses paid to other clubs as part of contract clauses relating to player transfers. Arsenal get £1.5 million for Bielik. We pay £100,000 to Florian Jozefzoon, which irks me as he hasn’t kicked a single ball for us in anger this season. Then again, maybe it’s bonus enough that he’s been playing elsewhere.

Leeds United are next. I still recall the whupping they handed out to us at Elland Road as a waking nightmare, and how that fast flowing, incisive group of cavaliers has not streaked away with the division is really quite incredible. They’re fifth. Victory for them would guarantee their playoff status, so their motivation should be clear. For my part I would love to put a spanner in the works, kind of repayment for the way we were humiliated in West Yorkshire. Also there’s the title to fight for. Brentford are away at Stoke City. The Potters are three points adrift of safety – there’s a great deal on the line for both teams.

At half-time we lead 1-0. It’s been a tense period of football. Leeds have had their chances but produce nothing on target, while we are more incisive and go in front when Marriott collects the ball deep in their half and holds it up long enough for Lawrence to get into the area, collect his cross and fire it home. Slack defending from the visitors, and again sheer shock expressed from these quarters that they aren’t simply blowing us away. Even without the injured Klich they’ve got such talent in their ranks. Agustin has scored more goals (22) than both my main strikers combined. Kalvin Phillips has no business playing at this level.

We expect an onslaught and Leeds provide one. All our rearguard qualities are brought to bear as they constantly test us. Bogusz equalises but his goal is ruled out for a clear offside. And then we make it 2-0, Lawrence again as he finishes a move that has involved our entire midfield. Tom Huddlestone (on for Shinnie) is credited with the assist, which is wonderful for a player who is enjoying his last moments in a Derby shirt. In the last minutes, Max Lowe is sent off after picking up a second yellow. All my substitutions have been made so Huddlestone gets to showcase yet another aspect of his flexibility by becoming a makeshift centre-back. Fortunately Luke Ayling has to go off injured for Leeds, so we’re both down to ten men and they fail to make any further impression. 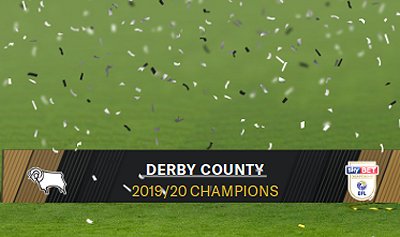 Look at that graphic and weep with joy, my friends. It’s so gratifying to have sealed the title against Leeds, and not to have to rely on results elsewhere (Brentford beat Stoke).

The curtain closer, away at Birmingham City, is now an irrelevance, a celebration as far as we’re concerned, and I use the occasion to field Scott Carson and Tom Huddlestone, both for sentimental reasons. The Brummies have settled back into lower mid-table. They’re decent, and in Jude Bellingham they possess a player of enormous promise, but we should win here and we do, Matt Phillips’s venomous strike in the second half making the difference. Wayne Rooney takes a penalty and misses the target completely. Their best opportunity falls to Lukas Jutkiewicz, who like any former Boro striker sends his close range effort safely into the arms of the keeper. 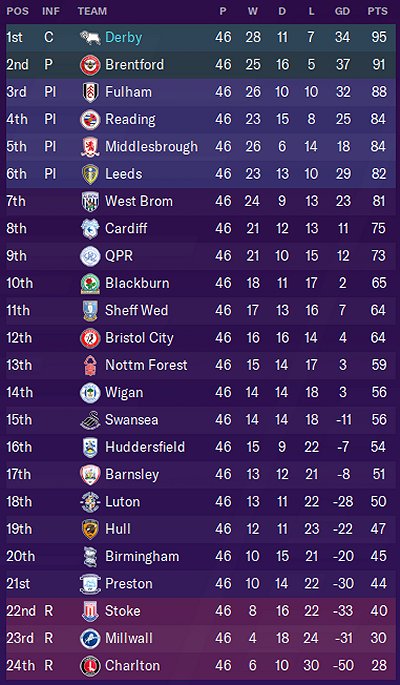 Further analysis will follow, but for now here’s the final table. For the Rams out there the sight of Forest in thirteenth place should be a source of some celebration. Leeds have just about squeezed over the line in sixth, following a campaign where they spectacularly under-achieved. I would still see them as playoff favourites, but on the whole it’s been pretty poor stuff from them. And what about Stoke? Going down with that side ought to be viewed as an aberration.

But all that really matters here is that we have scored the Championship title. Again, I’ll state that it was not my intent to do it at the first time of asking. I didn’t and still don’t think we’re good enough as we stand to survive a full Premier League campaign. By necessity we are going to have to produce some careful yet sweeping changes just to prevail, and that whilst aiming not to rip the heart out of a bunch of lads who have done themselves and their club proud. That however is a thought for another post. You will forgive me if, for now, I go away and bask. I’ve done a lot of things in Football Manager, but by my standards this counts as a considerable achievement. I’m off to celebrate with a cup of coffee and some Haribo Starmix (no really).