Eight league fixtures remain. Derby are number one in the table, but ours is a slim lead and plenty can happen between now and our final commitment, which will be against Birmingham in early May. As far as this month is concerned, we have two matches to play before the last of the mid-season international breaks.

We start with a tough one, entertaining fourth-placed Reading at Pride Park. There’s close to a capacity crowd for this encounter, which is what we would expect as everything is now on the line and the supporters are anticipating a fascinating challenge. Belying their pre-season prediction of lower mid-table, the Royals have spent time at the Championship’s peak and, even now with all those games and fatigue taking their toll, represent difficult opposition for us. It’s cold and throwing it down, making playing conditions hard, and the away team is causing us all sorts of problems, midfielder John Swift an especially enterprising presence at the heart of things. For all the good approach play they produce Reading are more toothless in attack. Their striker, George Puscas, is as wasteful with his chances as Troy Parrott is for us, indeed I am becoming increasingly vexed with our Irish Wunderkind – he should be loving it here; he isn’t.

Early in the second half I bring on Jack Marriott, and remove Graeme Shinnie for Tom Huddlestone. Can fresh legs make a difference here? Turns out they can. Lee Buchanan is creating all kinds of openings from the left flank, playing in place of the injured Max Lowe and revelling in the chance to showcase his energy and agility on the ball. In the sixtieth minute he crosses in-field to Huddlestone, who engages in a nice little passing triangle between himself, Chirivella and Baker. The latter finds Tom Lawrence bursting beyond Yiadom and playing a simple ball, which the winger guides beyond Rafael Cabral for our opener. About twenty minutes later, having dealt with a Royals response that is surprisingly laboured and weak, Lawrence does it again. This time it’s a grand solo effort, picking the ball off a dithering Mazgal, racing unopposed into the area and selling the keeper a dummy before slotting it beyond him. An errant goal from someone whose self-belief far exceeds any actual talent, but it’s beautifully timed and a pleasure to have him available again, this impish Welshman whose confidence has served us well here.

2-0 is a smashing result against a side we feared. The points are priceless. I’m delighted to have found a way to convert 0-0 draws into victories, to have added a little goalscoring potency to the side’s evident tightness at the back. Troy Parrott, however, remains a concern. Now a tender 18 years old and valued at £13.75 million, he really ought to lauding it over the standard of play at this level but it’s just not happening for him. I’m so perplexed over the return of 3 (three) goals from his 31 league appearances that I question my own tactics. Surely it’s how I’m setting things up that’s letting him down. Another clue is Parrott’s age; his talent, which must be considered to be raw and that this is the first place where he’s enjoyed an extended run of first-team football. And his playing average isn’t bad. His rating stands at 6.80, which I would view as passable – not brilliant, especially for a team that’s outplayed itself all year, but hardly bad enough to have him whipped naked through the streets of Derby while someone bellows ‘Shame!’ at him repeatedly.

Maybe I’m over-thinking it. The easier option is to drop him to the bench and select Marriott instead. For a £5 million signing the Peterborough forward has hardly stopped all the clocks, but he’s more composed before goal than Parrott could ever hope to be, and ultimately when the kid returns to Tottenham we will still have this fella on the books. Our last tie of the month, before the Interlull takes over, is at Preston North End. I’ve been to Deepdale previously, not to see a game but to visit the National Museum of Football when it used to be housed in an adjunct to the stadium. These days the exhibition is in central Manchester, reflecting the game’s overall standing, but I liked that it was once situated in a town where professional football began in this country; a nice touch.

Deepdale’s a neat ground and the sense that this team really should have at least had a spell in the Premier League before now is a fair one. For now they’re about as far away as it can get for them. The Lilywhites are in 21st place and casting anxious glances over their shoulder, though there’s an eight point gap to Stoke in 22nd. Safe to say it’s been a torrid campaign, with the arrival of Tony Pulis not really improving anything and just making matters more dull for everyone. Our instruction is clear – stop Scott Sinclair and it will all be fine.

As we approach kick-off I’m thinking about the influx of youngsters we’re monitoring currently. They’re a moribund bunch, and I’m happy to go with Darren Wassall’s suggestion that we only offer contracts to eight of them. He’s excited by Lukman Ojo, a 16 year old striker from Leicester who possesses a lovely sense of natural control and has all the determination that I would want to being to the side, yet there’s a long way to go for him. Watch this space, is what I’m saying, but don’t watch it too closely.

We win 3-0 before a worryingly half-empty stadium, the majority of noise coming from the visiting fans who appear to be the only ones with anything to shout about. Despite the rather emphatic scoreline, we win because we’re efficient. Chirivella is tasked with pocketing Sinclair and does a manful job of it, easily matching him throughout and effectively nullifying him from the action. Once they find they can’t play in their star man the home side are more or less neutered. At the other end Lawrence has us in front after 16 minutes when his beautifully curled free kick beats Rudd in the PNE goal, the keeper barely moving when he could have at least made a flailing effort to stop it. Straight from kick-off we get the ball back and advance, Jatta laying off a pass that Marriott collects despite the close attention of two defenders. He makes no mistake, in fact he enjoys it so much that he has a second within ten minutes. Once again soft defending from Ben Davies – a centre-half being asked to play at full-back – is at fault. They really are squeamish at the back, easy to bully and slow in their reactions.

After the break all we need to do is waste time and look forward to a break from football, as Preston are held off with little difficulty. I get the luxury of making substitutions based on fatigue rather than necessity, which is rather a lovely position to be in. 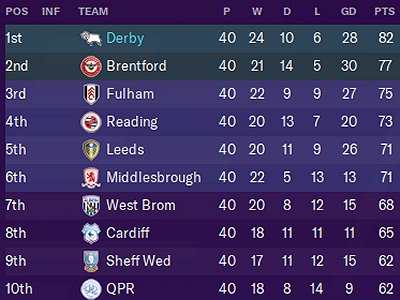 Equally pleasurable is our league position. We’re still top and from the looks of things we are even beginning to pull away. The mood in Derby is one of excitement. Local talk-in shows involve callers going through the run of remaining fixtures and identifying where it might be safe to drop points. They’re right to do that as the schedule looks like this:

It’s no one’s idea of straightforward. We’re perhaps fortunate that Forest, Brentford and Leeds will be taken on at Pride Park. We have the second best home record in the Championship and all that confidence will need to brought to bear during those three games. I’m sure they would relish the chance to take a bite out of us, especially Forest, so it’s going to be a time for Churchillian team talks and manful performances. Of the away ties, West Brom looks particularly painful. Cardiff is never an easy place to visit, and I could do with a more routine closing fixture than St Andrews. Birmingham are now managed by former Ram Steve McClaren with all the delightful returns you’d expect from such a proposition, but its potential as an upset is plain for everyone to see.

Derby have a sound number of players going off on international duty. Krystian Bielik may make his first appearance for Poland, which I think is a justifiable reward for his good work here. Wales call up Tom Lawrence; Andre Wisdom is with the Jamaicans and Ireland decide a non-scoring striker is what their cause needs and find a place for Parrott in the first team. Perr Schuurs and Jason Knight are with their countries’ Under-21s set-ups, while Jayden Bogle and Lee Buchanan are now part of the England U21s scene. Don’t come back injured, boys.