Heading into the crunch encounter with Fulham I am advised that Andre Wisdom is no longer concerned about his playing time, having been deployed much more regularly since the start of the year. Time to put out those club flags, Chris. Things have changed a bit since I made that promise to the Jamaican full-back. We now have Ivan joining in the summer, a direct replacement for Andre and a new contender to challenge the rise of Jayden Bogle… However, with so many matches still to play I’m going to need to keep as much of the squad as I can sweet and onside. It’s a delicate balancing act, but one I relish, keeping a close eye on team dynamics as I look to maintain a focused and loyal group of players. Only six players (Phillips, Parrott, Knight, Whittaker, Chirivella, Schuurs) have no opinion of me, and looking at those names there’s a trend – here on loan; recently promoted to the first team. The rest are in support of my work. Long may this continue.

Fulham are currently sitting atop the Championship. The Cottagers are strong favourites to go up and they’re playing to form. Aleksander Mitrovic is the leading scorer and Anthony Knockaert leads the division in assists. Scoring goals is not their problem, though in terms of conceding they are a mid-table side. The plan for them is to pummel the opposition into submitting, and clearly they’ve been rather good at it. So this will be a challenge. We rather spawnily snatched the points off them at Craven Cottage, achieving a rare shut-out, and we’re expecting the return at home to be tough going. 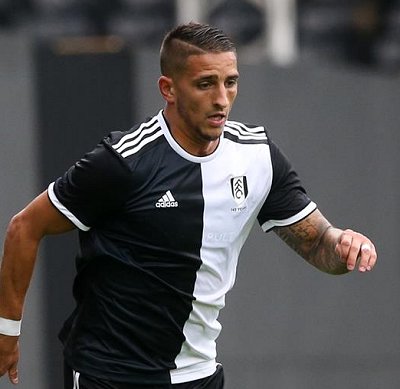 Which it is. Fulham are much the better side in the first half. We can only do our best against a fluid attacking unit that sweeps forward whenever it wants to. Their full-backs – Odoi and Sessengon – look especially terrifying, and Lowe and Bogle have a lot of work to do in order to stop them from overrunning us. But luck is on our side. Much like our unrewarded display against Bristol City earlier in the month, the visitors deserve better than 0-0 at half-time. We have defended doggedly, held our own and when Lowe tugs down Knockaert for a penalty Mitrovic shoots wide of the post.

I can almost hear the away fans rumbling about how this isn’t in the script. If that’s the case then they must really have cause to gnash their teeth straight after the break when Tom Lawrence puts us ahead. Bogle races to the edge of the goal-line and crosses the ball into the area, where Le Marchand is keeping tabs on Marriott but no one is there to guard Lawrence, who makes no mistake from close range. Riled and railing against the injustice, the visitors really start putting us to the sword, yet in classic fashion this just opens them up and ten minutes later we win a free kick in their half. Baker swings one in, and a messy jumble of players at the goalmouth results in Lawrence poking the ball across it for a 2-0 scoreline. Moments later, it’s 2-1 when Knockaert’s free kick just outside the box is headed home by Kongolo. A lesser team might fade at this moment, crumbling under the intense pressure, but we don’t do that. Bogle get the chance to make another cross, which Baker slams beyond Rodak to produce a final score of 3-1. Even the injury worry to Lawrence, which forces him off, turns out to be nothing more than a bruised ankle and two days’ absence.

It’s impressive work, and frustrating also. I should probably just revel in a good job well done, but instead I’m left to ruminate on our ability to do the double over the division’s best team while dropping points with casual disregard elsewhere. This is the manager’s lot, isn’t it? The glass is perpetually half-empty, and I’d argue so it should be. There’s always room for improvement. The talk of Championship football is that it’s wildly exciting because anyone can beat the other team on the day. Personally, I would prefer to be consistent. Where you see fun, fixtures that don’t follow a pattern, I just get aggravated by our inability to see off the sides we should be putting away.

Queens Park Rangers at Loftus Road are next. We’re playing away against the outfit sitting in seventh place, just outside the playoff positions, so it’s another stiff challenge. They’ve conceded more than us, but they’re better goal scorers, with Ebere Eze on the left wing their main concern. 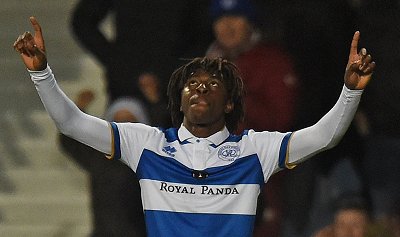 As we travel down, I’m reading a slew of reports from Joe McClaren. Our Chief Scout is in France and Italy currently, busily recommending young players who can potentially be drafted into the developmental squads. It’s mouthwatering reading, though Joe’s florid descriptions – has the potential to produce Tigana level moments of individual brilliance – are not matched by some of the video footage I watch of these boys. Now and then Joe throws one in for a laugh. He really likes the look of Federico Di Marco, a left-back playing at Verona. He appears terrific, really good, but we’d be paying more than £10 million for his services and I’m tempted to ask the scout to explain where in the world we’d produce that kind of money from.

The QPR game is a cagey chess match, short on thrills but from my point of view beautifully balanced as we match each other so well. Everyone out there is eager not to drop a bollock, the impression being that it might be decided on mistakes. The tackling is tough but fair, the passes carefully placed. There isn’t a lot for the purist to enjoy. I’m almost loving it, especially the seriousness my boys are putting into their work. It is however frustrating to see such parlous qualities in attack. Here’s an example. In the first half’s most threatening move, Waghorn is in possession and makes it as far as the QPR goal-line, a little to the left of the net itself. Marriott and Jatta have raced into the box and are demanding the ball, but the winger just holds on to it, as though there’s nothing he can do beyond eventually being harmlessly tackled and dispossessed, which is just what happens.

In the second half I think they’ve been softened up and resort to the classic managerial tactic of going for more direct balls. The risk is that we’ll lose possession more often, but you never know, it might be worth it if they panic and let one of those passes connect… In truth I’m happy enough to see us get a 0-0 result here. It would be a fair return, even though as time passes QPR are visibly tiring, having made far fewer changes to their line-up than I have (which, incidentally, I feel that you must do in order to cut down on potential injuries). In the 89th minute the pressure pays off. Lowe has a throw-in deep in their half. He picks out Marriott who in turn finds Chirivella in space just outside their box. The midfielder spots the run of Jatta, who can beat his marker and plays the pass, which results in a delightful, training ground worked goal.

While we’re snatching all three points in London the real crime is taking place miles away, where Middlesbrough entertain Leeds and win 4-0. Roberts puts in the kind of display that is made to make the mouth water, scoring and setting up two further goals as the Whites embark on their now traditional bottle job.

February ends with yet another away day, this time a short hop to South Yorkshire and Sheffield Wednesday. The Owls are now managed by Mark Hughes, someone who’s been in charge of so many teams that I’m surprised he’s never put in a stint at Pride Park. The signing fees and pay-offs that man must have racked up over the years… We’ll be playing Brighton in the FA Cup in midweek, so further squad rotation is in order. Buchanan’s back in the line-up, as is Baker while Lowe and Chirivella drop to the bench. I retain Matt Clarke for this game because he’s on loan from the Seagulls so cannot play against them.

In spite of their mid-table position Wednesday are in sizzling form. Sparky plays a 4-4-2, which you don’t see too often these days, and it’s working for them with Forestieri and Wickham in fine form up front. At Hillsborough they batter us, raining in shot after shot though we hold firm. At one point late in the second half Forestieri shoots from the sort of close range that people have cause to get up and celebrate, only for Montipo to pull off a classy fingertip save. And then we cock it up when Milosevic gives away a penalty. It’s a fair shout, one I can’t argue with as the Swede puts in an X-rated challenge on Wickham for which he’s lucky to be only seeing yellow. Barry Bannan sends the keeper the wrong way to make it 1-0. To sum up a disappointing afternoon, Matt Phillips gets a late opportunity to equalise, the kind of goalscoring chance where all he needs to do is avoid shooting straight at the keeper, and of course that’s exactly what he does. Knickers. 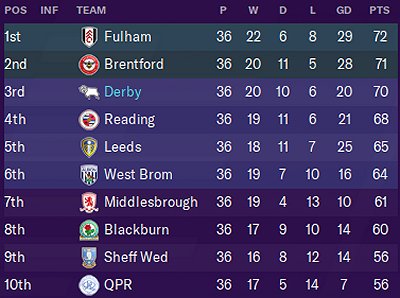 Despite the setback we’re winning a lot more often than we’re losing. I have concerns about the form of my strikers, their lack of goals suggesting it might even be an issue with the way I play them rather than their abilities, but otherwise it’s all good. We’re third, and if we finish in this position then I would see that as a job well done. Reading are beginning to slip a little, as predicted, claiming eight points from the month’s seven fixtures, which is poor compared with the fifteen we’ve picked up. Elsewhere, Brentford are more than matching our results and look like a good bet for promotion, whereas Leeds supporters must be thinking wistfully about the good times of the Marcelo Bielsa aegis. The continental football being ordered by Samuele Allerdici just isn’t producing for them right now, though I imagine you would write them off at your peril. After experiencing some horrific form, they have just come away from Hull with a priceless 4-3 away win, which says something about their innate character.

The Derby board, meanwhile, are dancing in the streets about what we’re achieving. It was a vision of theirs for Derby to become an established Championship outfit (which we have been for years, surely), and while the takeover discussions are still in progress it’s a good position to be in. I hope they remember this fondly when it all goes belly up, right?