Many moons ago I once wrote a regular column for a Sunderland fans’ website under my distant gaze as a Middlesbrough supporter. The gig didn’t last very long. It was supposed to play on north-east rivalries between the two clubs, but just exposed the reality that for Mackems the real opprobrium is felt for Newcastle United. My Teesside-based outfit is more distant, still a geographical rival but a mutual contest felt far less fiercely, and no one really cared about my musings. Besides which, I had no real resentment or dislike for Sunderland. They were and remain a slightly bigger team than mine, with a larger natural fanbase, and they face the same issues that we do – unable to overcome their natural position in the order of things, difficulties in attracting good players to the far corner of England – albeit with actual glories in their remote past, league titles and cup victories that Boro have not and in all likelihood will never get to experience.

Sunderland have fallen on harder times since those heady days in the early 2000s, when the goals of Kevin Phillips and Niall Quinn, spearheading a gritty side managed by Peter Reid, troubled the top ten and for a few seasons showed glimpses of potentially climbing higher still. It’s been a rough ride, yo-yo’ing between the top two divisions, staging remarkable efforts to stop in the Premier League at the arse end of fairly terrible seasons before finally succumbing to the inevitable. The Netflix documentary series, Sunderland ‘Till I Die, covers in its first run the side’s relegation season in 2017/18 that took them down to League One. The second season, released this week, explores life at that level, the club’s status as genuine sleeping giants cast low at a moribund tier of the game, trying under new ownership – coupled with a freshly appointed manager and a massively reassembled squad of players – to get back up to the Championship at the first time of asking.

It’s a show you really ought to make time to watch. If you are already subscribed to Netflix then you have no excuse. If you don’t then use your free month to take it in, which as a football fan you must do, not only because of the lack of action elsewhere but because it’s so heartbreakingly compelling. Made with the same high production values that the All or Nothing Amazon series has brought to various sporting set-ups, cameras silently follow Sunderland AFC at all levels – Board, management, players, supporters – to tell the story of the campaign.

It becomes quickly apparent that picking the Black Cats for coverage is an inspired and perhaps lucky choice. Far from Manchester City, the megaside guided to easy glory by Pep Guardiola in the All or Nothing series, Sunderland aren’t very good. They have money worries, the dichotomy of running a club that is naturally similar in size to City but with few of their resources, an army of fans who are hungry to see the good times return while living in a region high in levels of deprivation and recession. Coming from the north-east, I can attest to the importance people in the region place on football. There’s little else to enjoy. Life is tough. Industries that once formed the bedrock of local employment have long since vanished, leaving the people behind to face uncertain futures and for whom their teams are a focal and critical distraction. For the good folk of Sunderland, at the harshest end of three ‘big teams’ in the region that are all struggling with crises of their own, the misfortunes of the football club are a perfect mirror for the city itself. The glory days are long in the past. They want to get back there, but the way seems paved with hazards, the route unclear if it’s even possible to navigate a way through.

The second series, which I’ve just finished watching, covers the 2018/19 season. American owner Ellis Short has cleared Sunderland’s debts and sold the club to Oxfordshire businessman Stewart Donald. Down in League One, the squad is quickly shorn of many of its expensively assembled stars. 21 players are sold or released; those who can’t are either retained or sent out on loan, while at the same time they recruit almost an entirely new group. The team is now assembled along more modest lines. The likes of Jack Rodwell, paid a fortune and contributing almost nothing, a leftover of the folly-filled high-rolling purchases from the past, are quickly shown the door. Jack Ross is appointed manager after having achieved promotion to the SPL with St. Mirren. 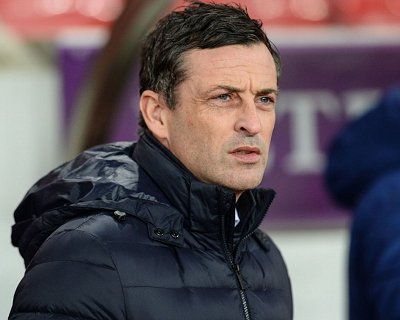 The makers of the show have indicated it was only the change in ownership that made a second season viable. Rather than film more of the same boardroom shenanigans, they now get to spend a lot of time with Gordon, clearly a more hands-on figure than the remote Short and obviously someone who pours himself into the job of moving Sunderland forward. From optimistic beginnings, as the team looks as though it might possibly have enough to be the archetypal big fish in a small pond and achieve a quick promotion, Gordon’s stress levels rise as their form takes a dip. Victories become draws, an endless sequence of tied games as the Cats fail to kill off their opponents. Much of this is put down to the departure of Josh Maja in January. An unexpected success from the Academy, Maja scores 15 goals in 24 matches and appears capable of driving the side to its target of going up. Unfortunately he’s out of contract; Sunderland fail to agree a new deal (which would almost certainly have blown their wage structure) and he joins Bordeaux, leaving his old club with a massive vacuum that they are never able to fill.

The best episode in the second series involves Gordon’s efforts to replace Maja. Their top target is Will Grigg, a Wigan striker who has previously proved to be a highly effective goalscorer within League One. The Latics don’t want to sell, and as we approach the closure of the transfer window the desperation for Gordon grows. Despite being advised continually that Griggs isn’t worth spending a fortune on, the side needs a striker to realise their ambitions and Gordon ultimately pays heavily to get his man. Griggs costs an undisclosed fee believed to be around £3 million, a massive outlay at this level, indeed a record fee, and on this comic-tragedy stage naturally goes on to be worth far less.

It’s at moments like these that the series becomes a real-life Football Manager story. I can reveal that at times I’ve paid a lot of money for a player who can never justify the fee, but there are deadlines coming up and quotas to fill, and you don’t quite know, do you? He might just be the key, even though deep down I know full well that he’s unlikely to even come close… 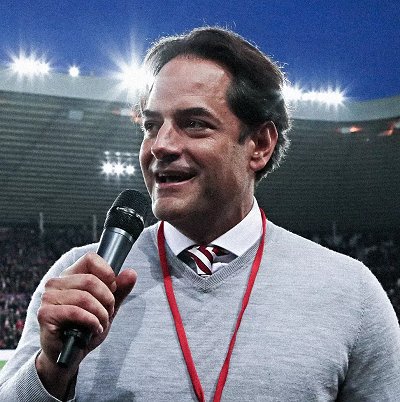 One element the show covers that the game rarely does is the impact of and on Sunderland’s fans. The Mackems are revealed to be painfully loyal, wanting to believe, broadly in support of the direction their club is taking, yet critical and realistic. They’re a sharp contrast with STID’s star performer, Executive Director Charlie Methven, who’s in charge of marketing the organisation within a climate where money is at a premium. Silver spooned, loud and urbane with plummy Southern enunciation and favouring the classic toff’s penchant of wearing red trousers in public, Methven is a sweary hurricane who perpetually berates the staff for not selling enough tickets when not bemoaning Sunderland’s stay in League One as needing to be as short as possible. His saving grace is that, like Gordon, he appears to really care, which strikes a winning note when all the fans knew before that was Short’s guiding hand working from thousands of miles away.

The series takes in two trips to Wembley, for the Checkatrade Trophy showpiece and the playoff final, the varied fortunes of the players, and in the end the sobering realisation that they will need to do this all over again. Seasons are long, and they rarely come across as more exhausting as they do here, with Sunderland experiencing just about every emotion imaginable, though it finishes with a very cautiously optimistic note that things are moving in the right direction, even if it’s at a painfully slow rate. Sadly, due to current circumstances their progress back to the Championship has been halted. The season has been frozen in time with Sunderland three points from an automatic promotion place. Their fight will go on.

One Reply to “TV Review – Sunderland ‘Till I Die”